“Those heroes that shed their blood, and lost their lives …
You are now lying in the soil of a friendly country.
Therefore, rest in peace.
There is no difference between the Johnnies
And the Mehmets to us where they lie side by side,
Here in this country of ours.
You, the mothers, who sent their sons from far away countries …
Wipe away your tears.
Your sons are now lying in our bosom and are in peace.
After having lost their lives on this land, they have
Become our sons as well.”

A memorial containing those words was unveiled by the Australian Veteran Affairs Minister on 25 April 1985.  The cove has been named ANZAC Cove by the Turks.

The story starts in 1914 when cabled reports from Britain – the Homeland – reached Australia and New Zealand forecasting that Europe was teetering on the edge of war.

When Britons returned to work after the August Bank Holiday, war was declared on Germany and involved the whole British Empire.  All the colonies were quick to jump in and offer their young men in service to the Empire.

Australia was in the middle of an election campaign.  The leader of the opposition offered Britain  “Our last man and our last shilling” in any war against Germany, and the Prime Minister responded with “Our duty is quite clear – gird up our loins and remember that we are Britons”.  How the young men loved that.  And how they rushed join up.  Many of them falsified their age to be in the army.  And I wonder how many would do that today.

Excitement was in the air and all around and the young men seemed to think this was a great adventure.  Many were concerned that they would miss out on the fun because this war was  ‘going to be over by Christmas”.  Alas, as we know this was not true and so many of those young men lost their lives on battlefields far from home.

On April 25th 1915 the ANZACS  landed at a cove in Gallipoli (now named Anzac Cove) and the Turks were ready and waiting for them.  On the first day in excess of 2,000 of these young Australian and New Zealand men were killed.  They were forced to retreat.  A further advance against the Turks was made in August but with the same miserable result.  On December 20th the force was evacuated and this evacuation was the only successful operation conducted at Gallipoli. 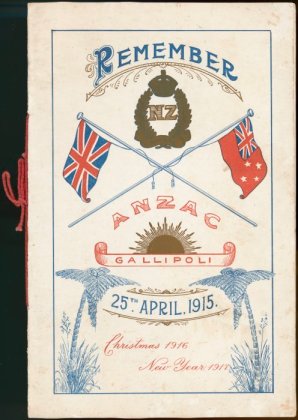 Now these young men and their bravery are commemorated on April 25th every year in both New Zealand and Australia.  It is a Public Holiday with shops being closed until 1pm in New Zealand.  And each year thousands of people attend the dawn service held at 5.45 am all around our country and in Australia.  Many of those attending wear the medals won by relatives in many wars.  Anzac Day is not just for the  failed Gallipoli campaign but to remember all those who fought for their country.

What a terrible waste of so many young lives.  But isn’t all war wherever and whenever it is fought.

The word ANZAC has become part of the culture of New Zealanders and Australians. There are ANZAC biscuits and rugby and rugby league teams from the two countries play an ANZAC Day test.  And people talk about the ‘spirit of ANZAC”.  “The Spirit of ANZAC was suggested by official war historian C.E.W. Bean to have ‘stood, and still stands, for reckless valour in a good cause, for enterprise, resourcefulness, fidelity, comradeship and endurance that will never own defeat.’ ”

Click here for scenes from the time and to hear The Pogues singing “And the Band Played Waltzing Matilda” the song that was played as the ANZACS sailed away on that October morning in 1914 on their way to ‘the war to end all wars’.

Laurence Binyon’s poem ‘For the Fallen’  – the fourth verse of which is so familiar to us today was quoted by Sir Winston Churchill,( 1874 – 1965), British statesman and politician, Prime Minister of Britain during the Second World War:

“They shall grow not old, as we that are left grow old:
Age shall not weary them, nor the years condemn.
At the going down of the sun and in the morning
We will remember them.”

Like Loading...
This entry was posted in Death, Disaster, Uncategorized and tagged memories, remembering, Remembrance, thanks, Waltzing Matilda. Bookmark the permalink.