ANZAC DAY – WE WILL NOT FORGET 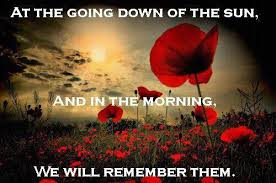 This is a solemn Saturday for those of us in New Zealand and Australia.  Anzac Day occurs on 25 April. It commemorates all New Zealanders killed in war and also honours returned servicemen and women.

The date itself marks the anniversary of the landing of New Zealand and Australian soldiers – the Anzacs – on the Gallipoli Peninsula in 1915. The aim was to capture the Dardanelles. Thousands lost their lives in the Gallipoli campaign: 87,000 Turks, 44,000 men from France and the British Empire, including 8500 Australians. To this day, Australia also marks the events of 25 April. Among the dead were 2779 New Zealanders, about a fifth of those who served on Gallipoli.

At the end of the campaign, Gallipoli was still held by its Turkish defenders.

They shall grow not old, as we that are left grow old:
Age shall not weary them, nor the years condemn.
At the going down of the sun and in the morning,
We will remember them.
From  For The Fallen
Lawrence Binyon, English poet, dramatist and art scholar. 1869 – 1943

Like Loading...
This entry was posted in Uncategorized and tagged Anzac Day, Galipoli, War. Bookmark the permalink.