A Water Tower Anyone?

I have always been interested in Real Estate in all it’s forms.  I sold houses many years ago and then for some 20 plus years ran my own commercial property management company.  Added to that I have bought and sold more houses than I can count over the years and now I assist my friend in her Real Estate business, so real estate is very close to my heart.

On this subject here in New Zealand we can watch episodes of Grand Designs on television.  This is a series featuring unusual and often elaborate architectural home building projects. The programme has been running in the UK since 1999 and shows no signs of flagging interest from viewers.  I have this series programmed in my TV recorder so that I don’t miss an episode. 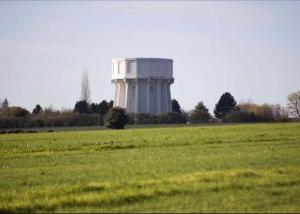 One of the things I love about the internet is that I can browse property papers from around the world.  Today I came across a great project that could well be featured on the programme,  It was a water tower for sale in a small village (Burton Green) in the UK some 8 miles from Coventry.  The tower was sold in 2009 apparently, and the purchaser had plans drawn and permission gained to develop it into a highly des res (desirable residence in Real Estate parlance).  This didn’t go ahead for whatever reason and the property is now offered for sale again.  The guideline is 395,000 GBP which seems awfully cheap to me for .33 of an acre of land and this building.  But what do I know of Real Estate in that part of Britain?

The plans call for the tower to be converted into a four bedroom house with all rooms, except bathrooms and cloakrooms having a curved wall.  I would like to see this when it is completed.

And then because I had time and the inclination I looked to see if Burton Green had a website.  Imagine my delight to find that it did, maintained by a private local individual, giving all sorts of information about the village.

I was particularly thrilled to read this blog from a former resident of the village, Anthony Richards.  In his blog he comments:

This arrived in Burton Green six years before I did. No one was ever allowed in it. I wish I had known about the “open day” shortly before its sale, so that I could have seen inside it, as this is something I had marvelled at for years. The nearest we ever got was the roadway serving it. Our family was entitled to use this roadway to provide access to its adjoining plot of land. Of particular interest were the hundreds of swallows which nested in its eaves every summer. The tower was a useful landmark for directing visitors coming by bus. You would simply tell them: “Get off at the water tower.”

And then I discovered there is a British Water Tower Appreciation Society.  It is apparently “The only British society dedicated to water tower culture and history. “Onwards and Upwards””.  If like me you are interested in seeking out the unusual, take some time to look through the archives of this blog.  You might find some interesting things there.

Here endeth another rambling blog from this ancient mind.

And as we are still awaiting the arrival of Andy the Armadillo here in a wet Wellington, I am showing you his photo again so that you know what to expect. 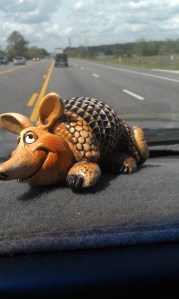 More on water towers in the Related articles