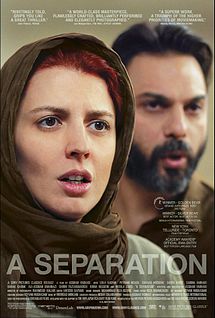 According to the Wall Street Journal this describes the movie that I saw yesterday.  The film is set in Tehran and focuses on a middle class couple who separate.  The woman Simin wants to leave Iran with her husband Nader and daughter Termeh.   She sues for divorce when Nader refuses to leave behind his Alzheimer-suffering father and determines to take her daughter and leave.

When the judge refuses to agree to the divorce Simin moves out of their house and into her parents house.  The ramifications of this move are what make the movie so compelling.

The two have been married for 14 years and have an 11-year-old daughter.  On their behalf Simin has acquired visas for them to leave Iran, a long drawn out process, but Nader will not leave.  His father, who lives with them suffers from Alzheimer’s and needs constant care.  In desperation Nader hires a woman to look after the house and the old man.  The woman is pregnant, has a daughter whom she brings to the apartment with her and an out of work husband who thinks the world is against him.

We see the difficulty that this devout Muslim woman has with caring to all the physical needs of this old man, and the toll that it takes on her own health.

It is a beautifully plotted movie and one well worth seeing.  The dialogue was all Persian but I was not aware that I was reading the subtitles, so compelling was it.  And at the end when the daughter is asked to determine which of her parents she wishes to live with, we are left with no answer.  A cliff hanger indeed!

The critics are in accord with their praise for this movie:

“Riveting.  Grips you like a great thriller”  Vogue (US)

“A superb work.  A triumph of the higher priorities of filmmaking”.  Boston Globe

“Calling it a masterpiece is too mild a compliment” Time Out New York.

So if you get the opportunity to view this movie, I recommend that you take it.

“What a pity human beings can’t exchange problems.  Everyone knows exactly how to solve the other fellow’s.” Olin Miller,