Those of us lucky to have been born and raised in first world countries accept that education is a given.  But imagine what it is like in some other countries where people are not offered education in any form and where some have to fight to obtain even the most basic education.

Yesterday I went to the Wellington premier of the movie The First Grader.  as a fund raiser for my favourite charity The Mary Potter Hospice.

The movie tells the story of a Kikuyu man who had been a soldier during the Mau Mau Uprising against British Rule in Kenya.  This was a bloody period between 1952 and 1960.   The movie showed flash backs to the time when he was captured and tortured by the British.

The story centres around this old man – 84-year-old Kimani Ng’ang’a Maruge.  The Kenyan Government announced free education for all in 2003 and this old man decided to take up the offer.  But hundreds of children were jostling for a few places in the school nearest to his  village and his application was rejected.  He was desperate to learn to read at this late stage in his life and  felt he must have the chance at the education so long denied to him and his generation—even if it means sitting in a classroom alongside six-year-old children.   As he said he fought for freedom and now he feels entitled.

Moved by his pleas (he attended and tried to apply several times after walking from  his even more remote village) the Head Teacher takes on the establishment and the parents of some of the children to allow him to attend the school.  Maruge is eventually enrolled and proved to be an apt pupil, so much so that in 2005 he became Head Boy of the school.

Kimani Ng’ang’a Maruge made headlines in media around the world and still holds the Guinness Book of Records record  as the world’s oldest primary school pupil. He said he thought that he was born in 1920 but of course, there were no records kept.

In 2006 he was invited to attend and address the United Nations on the importance of free primary education for all.

This is an inspiring movie, but also a challenging and thought provoking one.  I remember as a teenager and a young wife and mother, hearing about the Mau Mau uprising but of course, only from the British point of view.  In this movie we see that the British were not strangers to the use of  torture to gain their way.  I need to do some more research on this period to gain a better understanding of what actually went on.

But back to education.  Our young people, and I speak particularly of the young in New Zealand here, take the fact that the education is there,  free and available to everybody.  Many leave school with only a very rudimentary knowledge of even the basic reading and writing skills. Some people do go back to complete their studies as adult pupils, taking advantage of evening classes and there are a few schools that offer adult education where adults learn alongside the other pupils.  But not many.

How shaming then is it, that this elderly man wanted so much to be educated even just enough to read, that he was prepared to sit in class with babies?

When Maruge died in 2009 there were many tributes paid to him.  Click here for one from another wordpress blogger. 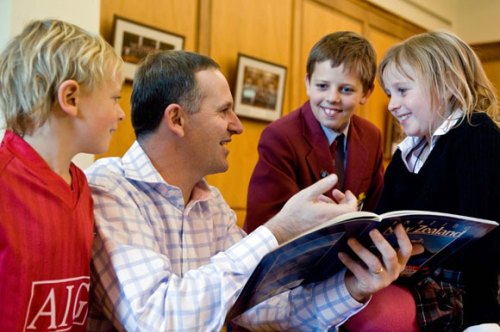 Here in New Zealand (and I think in the US too), September was National Literacy month.  This picture shows a meeting in the Beehive*  between our Prime Minister and a group of young school children.

In an interview at the time, he said:

“I am simply not prepared to tolerate up to one in five New Zealand children leaving our schools without the literacy and numeracy skills they need to succeed”  Rt Hon John Key, Prime Minister of New Zealand.

* Note – The Beehive is the name we use for the Executive Wing of the New Zealand Parliament Buildings.  It does rather resemble a beehive doesn’t it?

So what do we have to do to get this desire to learn ingrained into our young people.  Oh I know that many learn and do well.  My grandchildren are lucky in that they live in homes surrounded by books; hear adult conversation about things other than what’s on TV today and are generally encouraged to do well.  But what of the others?  These are the children and young people we should be concentrating on.  It’s no longer enough to say they must go to school every day.  In some areas the classes are large (some 30 or 35 children) and so undoubtedly some will fall off the edge.  I feel that there should be more help for the learning challenged kids.  Education of our young should/must be a bigger priority than it has been up to now.

“The aim of education should be to teach us rather how to think, than what to think – rather to improve our minds, so as to enable us to think for ourselves, than to load the memory with thoughts of other men.”
Bill Beattie, American manager and coach