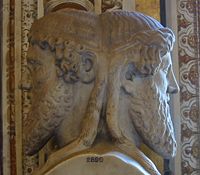 A statue representing Janus Bifrons in the Vatican Museums via Wikipedia

That greeting will be said and heard again and again over the next few weeks.  But the day celebrated around the world as New Year’s Day was not always January 1.

Celebrating the dawning of a new year is the oldest of all holidays and was first observed in ancient Babylon about 4000 years ago.  The Babylonian New Year began with the first New Moon (actually the first visible crescent) after the Vernal Equinox (first day of spring).

The beginning of spring is a logical time to start a new year.  It is the season of rebirth, planting new crops, and blossoming of flowers.  But the choice of January 1 has no astronomical nor agricultural significance and is purely arbitrary.

The Babylonian new year celebration lasted for eleven days. We know little of the actual celebrations but from reading about the period it would probably be  safe to say that modern New Year’s Eve festivities pale in comparison.

The Romans continued to observe the new year in late March, but as their calendar was tampered with by various emperors it soon became out of synchronization with the sun.  So in order to set the calendar right, the Roman senate, in 153 BC, declared January 1 to be the beginning of the new year.

At about this same time (153 BC) we are told that the tradition of making New Year resolutions began.  This was when  Janus, a mythical king of early Rome, was placed at the head of the calendar.  Janus had two faces and so was able to look back on the past and look forward to the future.  He became the ancient symbol for resolutions and many Romans looked for forgiveness from their enemies at the start of a new year.

Many of us make New Year resolutions and so if you have made yours be aware that you are following a tradition set in place almost 2,200 years ago.

Like Loading...
This entry was posted in Learning and tagged Janus, learning, New Year, NewYear, resolutions. Bookmark the permalink.

17 responses to “Another New Year”