We were watching something on TV tonight and the subject of coke came up.  Do you know that coke is the end result of coal that has been burned?  According to Wikipedia “Coke is a fuel with few impurities and a high carbon content. It is the solid carbonaceous material derived from destructive distillation of low-ash, low-sulfur bituminous coal. Cokes made from coal are grey, hard, and porous.”

Don’t know about any of that but I do know that it gave off enough heat to warm our apartment.

During and immediately after the war coal was rationed and as open fires were the main form of heating in most houses it was sorely missed.  I remember one day my Mother dressed us all in our coats, hats and gloves and took us outside the apartment.  There, sitting at our front door was a pram borrowed from a neighbour.

About a mile or so from where we lived was the local gasworks that consumed enormous amounts of coal and then discarded the coke that was left.  One day Mother had heard that one could buy coke but that one had to go to the gasworks yard to collect it.  Hence the pram borrowed from the neighbour. 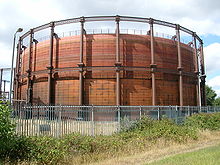 Gasometer in East London via Wikipedia

I remember it was a bitterly cold winter day – I think mid-afternoon – and the four of us walked to the gasworks.  When we arrived we were met with a long line of women who obviously had heard the same rumour.   I seem to remember there were only women in the queue, I suppose all the men were away fighting.

The line moved slowly, oh so slowly for three little girls with nothing to do but stand around.  I remember putting my youngest sister into the pram and my elder sister and I wheeled her up and down the line, talking to strangers and showing off our darling sister.  I can’t imagine any mother allowing her children to do this today.  Talking to strangers and accepting candy from some of them.  And they were all glad of anything to relieve the monotony of standing in line. I think other children joined us in our perambulations.

Eventually, we were at the head of the queue.  Mother asked how much she could have and was told two bags.  She paid whatever was asked (2 shillings comes to mind but I may be wrong) and the kindly man loaded the bags into the pram for us.

By this time it was dark as well as bitterly cold, but mother was in an exuberant mood.  She had bought extra heating for us.  And I do remember that as we trudged back home she balanced our youngest sister on top of the coke bags while my elder sister and I skipped along the road.  Mother’s excitement was catching although at the time we really didn’t understand the reason for it.  But in the cold nights ahead we were very pleased that we had gone to the gasworks.

How strong those women were who kept their homes and families together while their men were away fighting for King and country.  I wonder if I would have been as resilient as my Mother in the same circumstances.

When the world says, “Give up,”
Hope whispers, “Try it one more time.”
Author Unknown