Yesterday I published two posts.  The second by mistake.  I was so taken up with the story of Maisie and the Swarthy Gent in the Panama hat, that I hit publish and so it did so immediately. I had meant to programme it for today.

So today I am going to rest on my laurels and hope you enjoy both of yesterday’s posts – the one in response to the Trifecta Challenge entitled An Extremely Difficult Task and the second one continuing the saga of Maisie and her friends. 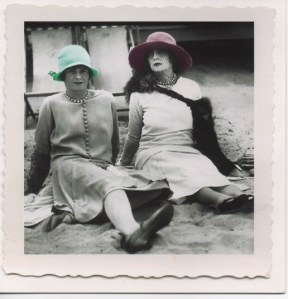 Oh yes, they still had their hats but…

“Would you like to live in Auckland?” he asked
“Yes! I’ll be able to see my sister”
“Auckland not Oakland” he replied.
New Zealand, one huge step to the other side of world

This is my entry in this weekend’s Trifecta Challenge.  We were told :

“Forty-three years ago today, Neil Armstrong became the first person to ever walk on the moon.  In celebration of Moon Day we want you to write 33 words about someone who took a giant leap.  It can mean whatever you’d like, just make sure you write exactly 33 words.”

If you want to know more about Trifecta or join in the challenges click on the tricycle above.  Good luck, it’s fun to try the challenges.

The taxi duly arrived and the two girls climbed into the back….

By now Daisie was exhausted with the music, the noise, the chatter and the dubious drinks she had consumed both at the party and at the nightclub.  She almost fell into the back of the taxi and immediately went to sleep.  This left Charlotte, who was rather the worse for drink (she had lost count of what and how many) to instruct the taxi driver to their destination.  Unfortunately, in her befuddled way she gave the driver the address of her house instead of Daisie’s.  Daisie slept through the ride only waking when Charlotte shook her as they arrived at their destination.

Charlotte paid the driver and walked rather unsteadily towards her front door with Daisie following sleepily.  The two girls entered the house and went to Charlotte’s room where they immediately fell asleep.

They were awakened the next morning by Charlotte’s mother who in turn had been awakened by Daisie’s mother who was worried when the girls hadn’t arrived home.  It had been too late to call when they arrived the night before and neither girl awoke early enough to put Juliet’s mind at ease.

After hurried breakfast Daisie departed to face her mother.  And it was then that she realised that the two bonnets they had borrowed from Maisie and her friends were missing.  Presumably still in the back of the taxi.  She was in a blue funk.**

Having unsuccessfully tried to locate the taxi and the missing bonnets, Daisie felt very low in spirits.  How was she going to tell her beloved grandmother Maisie that the two bonnets were missing?  She was not sure how she would take the news.  But, being a child of the 21st Century she decided there was nothing to do but to go and face her Grandmother and see whether together they could perhaps come up with a way of tracing the missing bonnets. 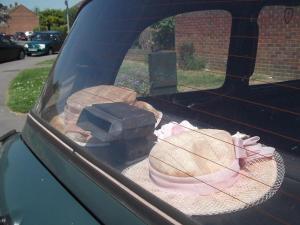 ** Note.  Thanks to Christine at Trudging Through Fog for pointing out that I had not used the word ‘blue’ in my post.  This sentence was added after that.

This is the fourth in the series about the bonnets.  If you haven’t read the earlier posts check the links – The Bonnets The Bonnets Part 2 The Bonnets Part 3.  It is also a continuation of the Hats Series.  Links to The Hats posts appear on each of the above three posts.

And this last post fitted in well with Trifecta’s challenge this week and so this is my entry.  The challenge is to write an entry between 33 and 333 words using the third definition of the word BLUE (adjective) :
1  : of the color blue
2  a : bluish
b : discolored by or as if by bruising
c : bluish gray
3  3  a : low in spirits : melancholy
b : marked by low spirits : depressing <a blue funk> <things looked blue>

If you want to try your hand at the challenge, you can find the complete guidelines on the Trifecta site by clicking the tricycle picture.

The alley was so dark.  No lights showing anywhere and along both sides were dark shadows; unknown lumps perhaps of boxes, perhaps of people waiting to hurt her.  But she had to go down that street to gain access to her building.  There was no other way; no other choice.

Behind her she could hear the loud mouthed youths taunting her.  Telling her in crude words what they would do to her when they caught her.

So she ran.  This encouraged the youths.  They too ran, laughing and jeering.  She was out of breath and crying and one of her shoes came off as she ran.  But she knew she had to go down that alley to reach her building and the safety of her family.

Suddenly coming towards her she saw the light of a torch.  Her Father, being worried at the lateness of the hour, had come looking for her.  Never had she been so pleased to see him.  She ran to him crying and laughing at the same time.  He gently held her and they turned towards home.  At that moment she vowed that never again would she remonstrate with him about waiting up for her and scolding her for being late home.

And the youths?  As with all bullies they disappeared as soon as they saw an adult coming to rescue his daughter.

Note – I have so enjoyed Janna T’s entries in the Trifecta challenge  that I thought I would try my hand at it.  This is my first attempt.

This week’s challenge is to write an entry between 33 and 333 words using the word alley defined as – ALLEY (noun):  a narrow street; especially : a thoroughfare through the middle of a block giving access to the rear of lots or buildings.

The complete guidelines for the challenge can be found by clicking  here .