Thursday was a normal day.  The sun was shining brightly and all was well with my world.  Just another Thursday, that is until about 2pm.  Lotte was lying contentedly in the sunshine, the painter across the road was listening to his quietly playing music and I had just sat down for a cup of tea after lunch.

Suddenly, the air was filled with an unholy screech coming from Lotte. my Tibetan Spaniel.  I rushed outside to see her and she was lying limply on the ground with her eyes way back in her head.  Once before she had suffered a seizure from being too hot and the vet I saw then said to sit with her for a while until she came out of it.  However, this time, she shrieked again and I knew she had to see our own vet Dr Michael.

Michael took one look at Lotte and rushed her into the consulting room.  There he agreed that I had a very sick little dog and when he checked her heart rate was 20 compared to the usual 136.  Very sick indeed, and when he looked in her mouth he declared that she was going blue and promptly rushed her off.  I was left to sit and wait for a verdict.

When he returned he asked several questions such as had there been any big changes to her diet, did I have problems with a neighbour who didn’t like dogs (apparently there have been a couple of poisonings in the neighbourhood);  had she wandered off and could she have eaten something poisonous; did I have any poisonous plants in the garden?  etc etc.  Well Lotte is confined to the premises and doesn’t go away unless it is with me, she rarely eats what I put down for her so she is unlikely to eat anything else, she doesn’t scavenge, my neighbours all make a fuss of Lotte and  so the answers to the questions were not at all helpful.

Dr Michael said he had given her adrenaline, oxygen and intravenous fluids as she was dehydrated.  He thought that she had suffered an anaphylactic shock caused by an insect sting, and said he would keep her in for the afternoon to monitor her.  As you can imagine it was a very subdued owner who went home without her dog.

Several hours later following a call from the surgery, I picked up a very docile, Lotte having been given the after-hours contact in case of an emergency and also was asked to bring her back the next day for a further raft of tests.  The evening and the night were spent with Lotte lying close to me, but thankfully there was no cause to call the emergency number. 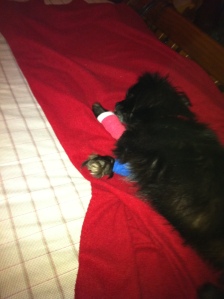 Lotte sleeping after her visit to the Vets

The next day she went back for a series of tests including a”blood tests, fluid therapy, radiology, ultrasonography and histology”.  The outcome of all these tests was the verdict that she had suffered a heart attack and as we knew had been very close to dying when I brought her into the clinic.

So now I have a very quiet little dog, who is not allowed any exercise and is confined to “House rest for 10 days”.  We are just spending the next few days quietly with each other – two best friends looking out for each other.

..And here’s a rainbow in case you need one today 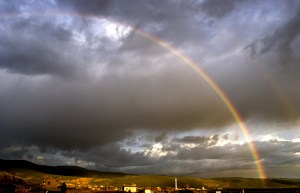