Oxford, City of Learning and mistakes 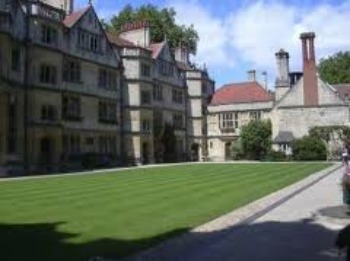 I think this is Brasenose College but it was several years ago.

I read this post from Hallysan at Photographic Memories today and it brought back vivid memories of my last time in Oxford.

It was several years after my husband’s death.  I had been away the year before for some months and spent time with an elderly widow as her companion.

The second time I went back to be with her, the United Kingdom had introduced many new rules for companions and caring to fit in with the requirements of the European Union which they had just joined.  So we had to have some training.  The organization through which I worked was based in Oxford and insisted that we go to Oxford for 2 days for this training.  Very basic food handling, people handling etc.

On the phone from Oxford, the woman at the office told me that most people stayed at the Y.  My thoughts on this, although never having stayed at a Y, were not good so I decided to source accommodation elsewhere.

I thought I had found a treasure and so booked for a couple of nights.  But horrors, what I found when I arrived very late in the afternoon was a far cry from what had been depicted in the advertising.

It was really late in the day, and as it was mid-summer in Oxford (July) all the accommodation was taken.  So after trudging around the city, I decided that I would stay for the night and hopefully find somewhere better for the next night.

Obviously, I didn’t stay for breakfast.  One look at the dining room and through to the kitchen convinced me that this was not a place to eat.

The next day when I arrived at the office I told the people of my disappointment.  Apparently, it was well-known that the place I had chosen was a disaster and it had been the subject of many complaints and had even featured in a documentary about bad places to stay.

To add insult to injury, one of the other women had stayed at the Y and loudly sang its praises.  What do they say – Pride comes before a fall.  I should have listened to Mother.

If you are English (and as old as me) you may remember a series called Rising Damp.  This ran from 1974-1978 and was set in a terrible house with a ghastly landlord.  My guy was Reggie Perrin incarnate.

They did manage to find me another place for the second night which was more what I had expected and they insisted that I make a complaint about the standard of the first place.  When I said that I wouldn’t be staying and told the proprietor why he became very agitated saying nobody had ever complained before.  As I had already paid in advance for the two nights I had to forfeit the second night’s cost, but it was well worth it to get away from that place.

That was the first time that I booked anything via the internet on the other side of the world.  And I learned a lesson.

“Everything’s got a moral, if only you can find it.”
So said The Queen in Alice in Wonderland. 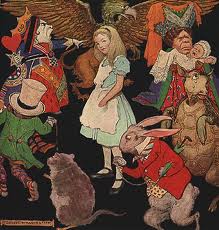