“If the family were a fruit, it would be an orange, a circle of sections, held together but separable – each segment distinct. ”
Letty Cottin Pogrebin, American writer and journalist. 1939 –

Wednesday is the day I spend time with my eldest grandson.  This time is very special to me, as I have said before. 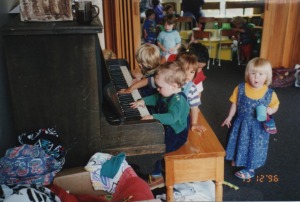 James is now 16 and no longer plays the piano.  But he has ‘dabbled’  and had lessons in clarinet, guitar and saxophone.  The dabbling came to nothing.  He now plays his iPod.

After spending time with James and having dinner we settle down as a family to watch a series of TV programs, most of which I would never have watched on my own.  We start with Two and a Half Men.  This is becoming dreary now that we know that  Charlie Sheen has been shown up for the ass he really is and know how he will be written out of the series.  Wonder what the future of the series is.

Then The Big Bang Theory.   My question each week is where did they find these goofy people to act in this sitcom.  The fashion police aka James always has comments to make on their clothes.

William Shatner stars in another sitcom – $#*! My Dad Says.  I understand this originated as a blog, so perhaps there is room for a sitcom from your blog!

Then Cougar Town and Drop Dead Diva.  I usually leave before the final one starts as I have an hour’s drive home (and it is currently winter).

But there is another reason I leave.  At 9pm on a Wednesday Night on Radio New Zealand (our public radio), we have Garrison Keillor and a Prairie Home Companion.  This show certainly keeps me entertained on the drive home.

We are told “the show originates from the Fitzgerald Theater in Saint Paul, Minnesota, although it is frequently taken on the road. A Prairie Home Companion is known for its musical guests, especially folk and traditional musicians, tongue-in-cheek radio drama, and Keillor’s storytelling segment, “News from Lake Wobegon”.

I wonder how the people of Minnesota (Minnesotians?) react to his very dry humour and constant picking on them and their habits.

One of my favourite parts is Guy Noir, Private Eye.  A down-on-his-luck detective, who ends up taking odd jobs to get by, such as finding missing poodles.  And often comments on current events weaving them into his story.

With this fabulous cast of characters, the drive home passes with laughter, lively music and enjoyment.

And quite recently when I took James to have some stitches removed following an operation, the surgeon and I spent a happy 15 or so minutes discussing Keillor and Lake Woebegon.  I don’t remember how we got onto the subject but interesting to see that we both shared the same sense of humour.  His parting words to James were “Look after your Granma. She’s rare”.  Was it my sense of humour, the love he could see I share with James or something quite different?

In everyone’s life, at some time, our inner fire goes out.  It is then burst into flame by an encounter with another human being.  We should all be thankful for those people who rekindle the inner spirit.  ~
Albert Schweitzer