As with most of my friends of my age I find that I now need to wear my glasses from almost the time I get up in the morning until I go to sleep.  The one notable exception is my elder sister who , while needing glasses in her early years now no longer even needs her specs for reading.  How fair is that?

And now I notice that each of my children, and their spouses, need glasses for reading.

So with my glasses on am I seeing any more clearly?  Looking around my world I see that there is still strife and war; still hungry children; still abused children and still homeless people.

But today, we didn’t need our glasses on to see the pod of Orca whales spotted in Wellington harbour; they were swimming about 100 metres off shore this afternoon. 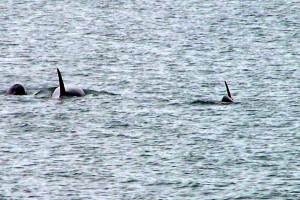 Earlier reports had them on the other side of the harbour.  A local man, with a friend visiting from Hawaii spotted the pod .  Apparently they followed the pod for about 90 minutes.  He also said dolphins were playing with the Orcas and they could be seen diving alongside the whales.

According to the Department of Conservation  Orcas come into the Wellington Harbour several times a year.  We are told the whales could have been following the coast line of the North Island and followed it into the harbour.  Or they could be taking shelter from turbulent conditions in open sea.

We are also told by DOC that while commonly called ”killer whales”, Orcas are actually large dolphins.

But we obviously didn’t have our glasses on when some shady deals were being made.  The Serious Fraud Office has revealed it is investigating another failed finance company over alleged related party deals.

How many more of these finance companies are going to be in the spotlight in the coming months.  And how many people have lost or will lose their retirement funds having invested in these companies.

And I shall need my spectacles to see the upcoming movie The Best Exotic Marigold Hotel.  We have seen the trailer for this movie every time we have been to the cinema recently and I am really looking forward to it.

The blurb tells us the story follows a group of British retirees who decide to “outsource” their retirement to less expensive and seemingly exotic India. Enticed by advertisements for the newly restored Marigold Hotel and bolstered with visions of a life of leisure, they arrive to find the palace a shell of its former self. Though the new environment is less luxurious than imagined, they are forever transformed by their shared experiences, discovering that life and love can begin again when you let go of the past.

So what else do I see through these spectacles?

I visited the library today and picked up a couple of books by a writer new to me, Charles Finch.  My elder sister told me about him a weeks or so ago and then today I read this post from Marie at My Life, Such as It is.  I now have both this book September Society and the earlier one in the series A Beautiful Blue Death to read. 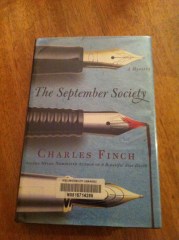 So now I am off to bed with a cup of coffee to read about the antics and adventures of this “Victorian gentleman and armchair explorer”, Charles Lennox.  I hope the stories are as interesting as I am led to believe by Marie and my sister, Christine.

“The common eye sees only the outside of things, and judges by that, but the seeing eye pierces through and reads the heart and the soul, finding there capacities which the outside didn’t indicate or promise, and which the other kind couldn’t detect.” Mark Twain.