Along with much of the free world, I have checked in to watch some of the Olympics.  I must admit here that I didn’t watch all through the opening ceremony because I guess I have a short attention span.  But I did cheer (albeit in my head) when the New Zealand team marched into the stadium and then again when the England team arrived.  You see, I have definite divided loyalties here.  Can you image what happens when NZ plays England in a test match.!  Canada of course, also got a cheer from me.

I have seen the James Bond and the Queen skit of them arriving in a helicopter and think it was fabulous.  I think the Queen enjoyed it too.

Today we had the spectacle of that road race and wasn’t that exciting.  Who would have expected that result?  England were tipped to bring home the medals.  Congratulations to Kazakhstan wonder Alexandr Vinokourov for winning the gold medal.  Such a long ride and those young men all looked so fresh, fit and healthy at the end of the 5 plus hours.  Our hope Jack Bauer, came only tenth but that was a sterling effort on his part.  Apparently he was fighting cramps but when asked if he still harboured hopes of a medal in the final stages, Bauer said: “Of course I do”.

We cheered on our NZ rowing pair who sliced 6 minutes off the world record – and these two rowers haven’t been beaten since they came together in 2007 winning 16 major titles in that time.  So although this was only a heat, we have great hopes for a gold here.

As you know from previous blogs, I am a Londoner and even though I live 12,000 miles away I am still proud of what has been achieved in my ‘home’ city.

The last time the Olympics was hosted in London was 1948.  London and Londoners were war-weary and concern was expressed at how the Olympians would be fed and housed.  Now all that is changed.  According to the Los Angeles Times “London is one of the most cosmopolitan cities in the whole world”.  Please read the full report here.

But for me, the most impressive thing is how they have turned an almost derelict part of the city into a games venue up there with any other in the history of the games.   I am sure that Boris Johnson (London’s Lord Mayor) and all Londoner’s wherever they live, must be very happy with this.  When I was growing up this whole area was full of factories and as these factories moved away the area became abandoned.  And now look at it.

I am looking forward to seeing more of the games, but intermittently as I do have other things to do with my time.  Luckily, I have the ability to record anything that I particularly want to see and so can watch at my time.

The Market – A Lesson Learned

Well once again WordPress is playing with my mind.  I published the post but now I have only half of it.  Where did the rest go?

So here it is again –

Today I went to the Market.

It was still raining this morning what a surprise!  I had arranged to meet a friend for coffee and afterwards I decided to check out the Saturday market in the area. I have seen the notices for the market many times, as it is held in the grounds of the school in the same street as Mary Potter Hospice.

The market was full of stalls selling fresh produce, mostly vegetables and fruit but one had freshly baked bread and bakery items, another was selling gourmet salamis – but the choice of vegetables was outstanding. 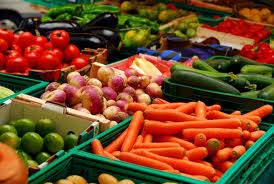 I was told that all vegetables were grown organically and had been picked either in the early hours of this morning or else late yesterday.  They certainly looked fresher and were somewhat cheaper than those sold in the local supermarket.

I bought far too many vegetables but as winter is almost upon us, what I don’t use this week can be made into soup and frozen.  I like making soup so this isn’t a drag for me.

And then of course, I started thinking about markets when I was growing up in London.  I have written about street markets before.  If you are interested in the ramblings of this ancient mind, click here.

As young girls we accompanied our Mother to the market every Saturday afternoon.  It didn’t come with a choice, and until such time as she determined that we were old enough to act responsibly on our own, we had to go with her. 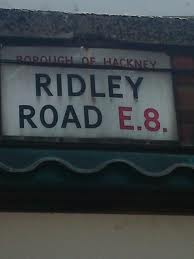 The market was about a 30-minutes walk from where we lived and this time was used to talk about all those things that a mother and her three daughters talked about.  We each carried a shopping bag mostly containing fruit and vegetables as this was all we ever seemed to buy at the market.

It was our special time together.  I clearly remember when I was about 15 and beginning to go out with boys, my Mother ribbing me about my beau.  She was ably assisted in this by my elder sister.

I wonder if the memories of those time are sweetened as we grow older.  Could our lives have been so special then.  As Barbra Streisand sings:

“Can it be that it was all so simple then or has time rewritten every line?
If we had the chance to do it all again tell me would we? Could we?
Memories, may be beautiful and yet what’s too painful to remember we simply choose to forget
So it’s the laughter we will remember whenever we remember the way we were.”

Mother has now been dead for some 16 years and so I can’t discuss those far off days with her.  But I do have two sisters who were there at the time.  I wonder if their memories of those times are as vivid as mine. 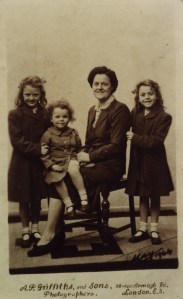 Mother with her three daughters

So what is the lesson learned?  To write my blogs in Word before copying it into WordPress.  That way I won’t have to rewrite it.  And no doubt if you read the original version of The Market (and I know that some of you did as you have already commented on it) you may see the changes.  Obviously, this mind cannot retain what was written just a few hours ago.  Oh dear.
As a dear departed friend once told me “Growing old aint for the fainthearted”.
And now I have restored the original so you will be able to read the same post twice. 🙂 🙂 – sorry about that.
Related posts

Back to the Real World

After my foray into fiction writing, I have returned to the real world with a bump.

When writing about the Terrible Trio (Maisie, Juliet and Imogen) I got to thinking about school and school days.  So I Googled my old school, John Howard in London to find that it has completely changed.  It is now an ‘academy’ and its name has been changed to Clapton Girls Academy.

When my two sisters and I attended the school there were about 450 pupils, all girls and now I read that the role is up to 900 (still girls only)  and more than 50 languages are spoken at the school and 70% of the students hold English as an additional language.  When we attended I don’t think there were any girls whose first language wasn’t English.  How times have changed.

When we three attended John Howard there were strict conduct and dress rules.  No running inside, outdoor shoes had to be changed into indoor shoes when entering the school building; and the uniform was an indescribable brown tunic with custard yellow blouse.  I think we wore brown polished leather shoes in winter.  For gym we had an awful green romper suit; we had a brown beret and blazer for wearing in the street.  Woe betide anyone caught not wearing the beret in a proper manner (as determined by the sixth and seventh form and/or prefects).  I can’t remember what the summer dresses were like – perhaps green with white trim.  And we wore leather sandals with these.

Oh and I do remember that plimsolls aka gym shoes had to be dyed brown.  (Well this would surely have killed those shoes anyway.)  Poor mother having to dye three pairs this ghastly colour.

There was a magnificent oak staircase in the main entry hall, but only staff and prefects could avail themselves of it.  The rest of us, the hoi polloi, had to use the back service stairs.  Oh, the joy in being made a prefect and the first time we could use that staircase!

I haven’t thought about school for many, many years but today after looking it up on Google I decided to become a member of the Old Girls Society and so I have joined.

We had a scary (for the young girls anyway) headmistress who was called Dr Hunt.  I do believe that even other staff members used her title – no informality here.  She had a magnificent study that overlooked the playing fields and the school grounds and she would sit in her chair and survey her kingdom.  In her way, she was a very powerful person.

I attended that school for 7 years.  There I learned my love of the English language and its literary greats.  I learned to respect authority and to take responsibility for myself and my own actions.  They were good years for me and I wonder if today’s young women will say the same when they get to be my age.

Posted in Education, Growing up, School