THE END OF THE GOLDEN WEATHER

Yes, this week the weather gods decided that we had had it so good for so long that they would introduce winter with all her faults.  We seem to have skipped past autumn this year straight into winter.

This week we have had torrential rain and hailstones battering on the outside of our house and we have been pushed to fire up the central heating and light our log fire.

We continue to be grateful for the fact that we do have a warm and comfy house and we can have the warmth we need in winter.  How many people in this world are without these basic needs.  But the gratitude doesn’t stop us thinking longingly about those warm summer days that we enjoyed such a short time ago. 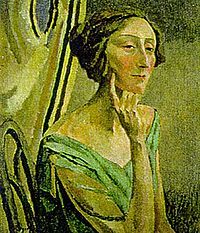 After yesterday’s mostly sombre post I thought I should do something a little lighthearted.  But what?  My mind is a complete blank.  I look around the study for inspiration.  My eye sets on a card with this comment:

“I HAVE OFTEN WISHED I had time to cultivate modesty…But I am too busy thinking about myself”  Edith Sitwell.

There is a very stern photograph of Dame Edith that accompanies this comment. Nothing much lighthearted to say about this Dame.  She didn’t like her eccentric parents and lived most of her life with her governess; she never married and became passionately involved with the homosexual Russian painter Pavel Tchelitchew.  When her mother died in 1937 she didn’t attend the funeral.  She fell out with Noel Coward after he wrote a skit on her and her two brothers for a revue and only reconciled with him after her 70th birthday.  She ended her life in a wheel chair having suffered with Marfan  Syndrome for most of her life.  According to Wikipedia (and what would we do without it?) “Marfan syndrome (also called Marfan’s syndrome) is a genetic disorder of the connective tissue. People with Marfan’s tend to be unusually tall, with long limbs and long, thin fingers.  The syndrome is inherited”.  Looking at Dame Edith it is easy to see that she fits this description.  Not a happy life.

And now Andy is eying the jelly bean jar that has been replenished.  He is a greed y little armadillo.  I must remember to warn Patti when he goes there to stay next week.

I really shall have to think of some great adventures for him in his last weekend in New Zealand.Perhaps his friend Lotte can come up with some suggestions.

But perhaps not.  It is a sunny but chilly morning and having been outside for a few minutes, Lotte is back in her usual place in front of the fire.She doesn’t like mornings; doesn’t like the cold but loves warm fires and long walks.

And aren’t some politicians foolish?  We have a situation here where the leader of one of our political parties is in hot water because of a couple of cheques he received in support of (an earlier) mayoral campaign.  Under the Local Electoral Act a candidate must declare if he/she knows the source of any donation over $1,00.

The cheques are identified as coming from the internet millionaire Kim Dotcom but they were recorded as anonymous.  These cheques were for $25,000 each and were deposited by a Dotcom employee who is quoted in our newspaper today as saying that Mr Banks (the politician) had phoned to say thanks for the donation.  Banks denies phoning to say thanks as he didn’t know who made the donations.  We all know there is no such thing as a free lunch and Dotcom is on record as saying that he thought Banks could help him in his desire to purchase a $NZ30million mansion.

We know that power corrupts but how foolish is this man to think he won’t be found out.  And it looks as if he might be asked to stand down from  his ministerial portfolios pending an enquiry. If you should be at all  interested to read the coverage by The Guardian in the UK click here

For the record the United States is trying to extradite Dotcom on charges including internet piracy and money laundering.  Watch this space!

And browsing through the newspapers online,  I came across an article in 24 hours Vancouver describing how a man, Nik Wallenda, will walk across Niagara Falls on a tightrope.  “The walk should take 35-40 minutes but if the weather is good I may spend more time out there.” he said at a news conference on Wednesday.  I heard this man being interviewed on the radio yesterday and asked myself – Why?

And in the  Calgary Herald I read “Canadian woman flushed with pride”.  Canadian stunt woman Jolene Van Vugt sped into the Guinness Book of Records by riding a motorised toilet at 75 mph in Sydney, Australia.  Again I ask myself – Why?

And The Boston Herald has a front page story on the wedding reception from hell.  Apparently the groom’s brothers were denied a drink at the bar.  this incensed the groom who punched a wall and set about destroying the venue’s coat room after being advised to calm down by another guest.

Apparently when the police showed up it was mayhem with guests rolling around the floor fighting and then the  mother of the groom attacked the mother of the bride.  We are told that the happy couple took off to the  Dominican Republic to enjoy their honeymoon and I hope, forget the unfortunate start to their married life.

A headline in Singapore’s The Straits Times reads “War room challenge for Japan begins in bedroom”.  I leave you to work out what that is all about.  Hint – the deal between Japan and the US over basing arrangements for Okinawa and manning the bases.

And the scandal rocking the Catholic Church continues.  The Belfast Telegraph has on its front page the refusal by Cardinal Brady.  Brady is the Catholic Primate of all-Ireland and  it has been proven that he knew of child abuse amongst priests and did nothing about it.

In an expose on BBC’s This World programme he said  he  accepted he was part of “an unhelpful culture of deference and silence in society, and the Church”.  Should you wish to read more of this click here

Glasgow’s The Herald has an article headed “Rain Blamed as Fewer Scots Beaches Pass Quality Test”.  Did you know there was a Marine Conservation Society’s Good Beach Guide?  No, neither did I until I read this article.

I couldn’t resist this heading in Britain’s Independent – “Rain stops asparagus festival”.  Apparently the recent rains and flooding have resulted in the seasonal vegetable being almost dormant.  So the annual Festival has been cancelled.  Adding to the problems of no asparagus, the venue that was to host the festival, in the Vale of Evesham is under water.  So no product plus no venue equals no festival.

And The Church of England Newspaper has this heading on its front page – ‘Conference – It’s time for us to elect chairman of the Primates.”  Are we to understand that monkeys and apes will now rule the Church?  Well of course not.  But editors should pay more attention to the headlines.

So are you bored with my run around the newspapers of the world?  I just love reading what is going on and being reported in other countries.  This has become a bit like a drug and I find myself going back again and again to read the papers.