We had returned to live in Takapuna permanently and therefore, were required to obtain a valid New Zealand licence.  I applied and was given a date and time to attend the test.  The road rules are/were virtually the same as those in the UK and so I was all set.

Except that I forgot.  The children had left for school, husband had gone to the office and I was enjoying a leisurely cup of coffee when I remembered.  A hurried bath (I didn’t shower then as time was never an issue) and off to the testing station.

Fortunately, husband had taken my Mustang that day leaving me his car.  I didn’t think I could take my test in a left-hand drive car when here in New Zealand we drive on the left.

1969 Mustang Mach 1.  Photographed in Montreal via Wikipedia. Mine was exactly the same colour et al.

I was given a short oral test by a very pleasant young man and then told to wait for the driving tester to arrive.

At that time, the NZ police force was split into two distinct sections – the police and the traffic police.  So all those employed at the testing centre were employed by the Traffic Department or were traffic police.

The door opened and out hobbled a young man in uniform, with one leg and one arm in plaster.  Traffic police used motorcycles and he had been involved in an accident and crushed his left leg and left arm.

He greeted me cheerfully and we set off for the car.  No elevator in the building and we had to go down one flight of stairs.  I had quite a wait at the foot of the stairs while he made his laborious way down.  He had to stop when he reached the bottom, not only to get his breath back but also to overcome the pain.

A good start to another driving test!

We went to the car whereupon he asked me to drive around the block. His comment was that as I had been driving in three countries over a period of ten years, there was little he could ask me to do that I hadn’t already done.  So again once around the block; back to the testing centre where he signed the form and I was presented with my NZ Driver’s Licence.

And that is the final time I have to sit a driving test.  Oh, I forgot.  Here one has to reapply for a licence at age 75 and then according to the NZ Transport Agency the following applies:-

“Once you turn 75 there are a few changes to the process for renewing your driver licence:

So watch this space.  Wonder what will happen when I reach 75.

“Seize the moment.
Think of all the women on the Titanic who waved off the dessert cart.”
Erma Bombeck

During the original two years we lived in New Zealand, we were allowed to drive on our British licences.  But when we arrived in Montreal, we were told that we would have to obtain Quebec licences immediately.

So shortly after we arrived, my late husband told me that he had arranged for us to take our tests.  There were two other men transferred into the area by the company at the same time, so we all went off to the testing centre together.

Frank and Lise were from Paris, France; Alexandros and Maria were from Cuba, via Bogota and then there were us from New Zealand.

We duly arrived at the testing centre and were separated while we took a very cursory written test.  Then we were each called in turn to take our driving test.  The man who was to test me arrived and sheepishly herded me out of the door into the car.  He then looked at me with hung-over, bloodshot eyes and told me that he had very little sleep and was very tired and I added under my breath, ‘hungover’. 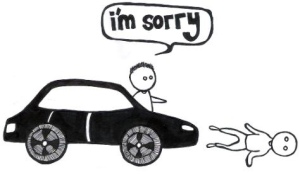 We drove once around the block whereupon he asked me to pull over and promptly fell asleep in the passenger seat.  Well, what to do.  In a car in a strange land with a strange man asleep.  So I turned on the radio to some very quiet music and sat there for about 15 minutes.  I then gently woke him and he sheepishly told me to return to the testing centre.  On arriving there, he pronounced me safe to drive, took me inside the centre and signed a form whereupon I was the proud owner of a Quebec licence.

When I told the other members of the party – well out of earshot of anyone in the testing centre – about my tester they thought it a great laugh and very unfair.  They had all been put through the hoops to prove that they were competent drivers while I sailed through.

My late husband always said I was born under a lucky star and I guess in this instance he was correct.

“No day is so bad it can’t be fixed by taking a nap.”
Judith Baxter

The one thing that unites all human beings, regardless of age, gender, religion, economic status or ethnic background, is that, deep down inside, we ALL believe that we are above average drivers.  ~Dave Barry,
“Things That It Took Me 50 Years to Learn”

My father in law bought me a car when I was expecting my son, so I had to drive.  I had taken lessons before that and failed but as I had no real urgency to get a licence I did nothing about it.  However, there was a brand new Austin A40 car in the dealership just waiting for me to go and pick it up.  So I had a few lessons and applied for my licence.  The driving instructor was very strict making me reverse into tight spaces and around corners etc.  Reversing is still not my strong suit. 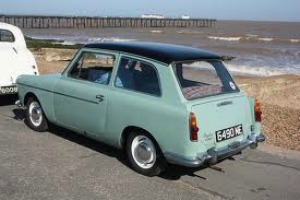 This photo sent to me by a friend. My A40 was white.

We were living just north of Glasgow at the time – 1962 – and so the test had to be taken in Glasgow.  By the time my appointment came I was about 8 months pregnant but didn’t want to go to the back of the queue again so I duly turned up for the test.  I wish I had had my camera with me when I saw the look on the tester’s face. 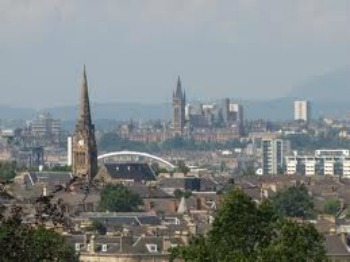 View of Glasgow via Wikipedia

We got into the car on a wet, windy Glasgow day.  At that time, many of the streets were cobbled and of course, slippery in the rain.   We did a couple of hill starts, drove around the streets, some parallel parking and driving through the centre of the town.  This was a bit hair raising as there were many policemen on point duty for some reason that day.  Although I was nervous I managed not to hit any of them.

If I may say so I took the test with aplomb although the tester did say he thought we shouldn’t try sudden stops with a look at my advanced stage of pregnancy.

I don’t know who was the most pleased to get back to the testing office whereupon he pronounced that I had passed the test.  From the look on his face I think the tester.

Have you seen this?

“You never really learn to swear until you learn to drive.” Author Unknown