“There behind me, far away, never more beautiful since, was the fabled cluster of spires and towers.”
From Surprised by Joy – C S Lewis.

On Saturday we spent the day in Oxford with my blogging friend, Sallyann from Photographic Memories.  Sallyann lives in Oxford so we were lucky in having our own private tour guide.

I have been to Oxford several times before but have never seen many of the places Sallyann showed us.  Sallyann is the intrepid photographer but for this day, I took the shots.

We went on a bus from London – 3.5 hours ride from London to Oxford.  Sallyann met us at the bus terminal and we decided to start our afternoon with lunch.  Had we ever been to the pie shop?  No so let’s all go there.  The Pieminster is one of a chain of pie shops and this one is set in the Covered Market in Oxford.

Sallyann hadn’t been there either; her daughters had suggested that she take us there. Sallyann and my sister each had Kate and Sydney (steak and kidney) and I had Chicken of Arragon pie (chicken, smoked bacon and tarragon) all served with mashed potatoes and gravy.  We all declared them very good and ate up every last bit.  This was different to the pie shops that abounded when I grew up in the east end of London.  These pies there were beef, served with mashed  potatoes and liquor – a gravy made primarily of parsley and a taste unlike any other I have ever had.  But back to Saturday and our pies and the rest of the afternoon.

We started in the castle precinct.  Oxford Castle is a large, partly ruined Norman medieval castle.  We didn’t go inside but we went to the prison (part of the castle precinct) that has now been turned into a high class hotel. – Malmaison, Oxford Castle.  We are told that the rooms are made from joining two cells. Unfortunately we were too late in the day to see the rooms opened as they were being cleaned. 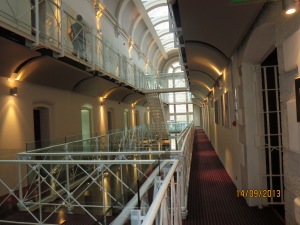 We wandered around with our own personal tour guide, down alleys  and little streets that one would hardly think could have traffic going in both directions – many looked too narrow for cars to pass each other.

Hidden-away squares adorned with Victorian style lampposts made us feel as though we’d  stumbled out of the wardrobe and into Narnia.  We saw the Brasenose College Door said to be the inspiration for C S Lewis’ “The Lion, the witch and the wardrobe”  with the close by,  Radcliffe Camera.  C.S. Lewis, creator of the Narnia stories, created them right here in Oxford when he was a professor at Magdalen College. 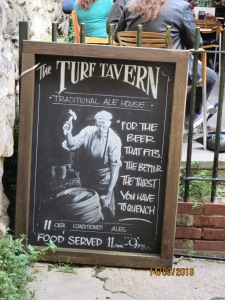 We were taken to a 13th century  pub – no we didn’t go in.  It was full of students and visitors on a busy Saturday afternoon.  But without our guide we would never have stumbled upon this gem.

We all agreed it was a great afternoon.  It ended with coffee, laughter and promises to keep in touch.