And the winner is…

The world knows about our almost unstoppable rugby team, the All Blacks.  In a test against the British and Irish Lions on June 24, they won and another Test is set for Saturday.

And we have had golf stars – Lydia Koh the youngest ever No 1,  Sir Bob Charles who has won numerous titles over a 50-year playing life and Michael Campbell who won the US Open.  Dame Susan Devoy dominated the squash world for many years and now.. 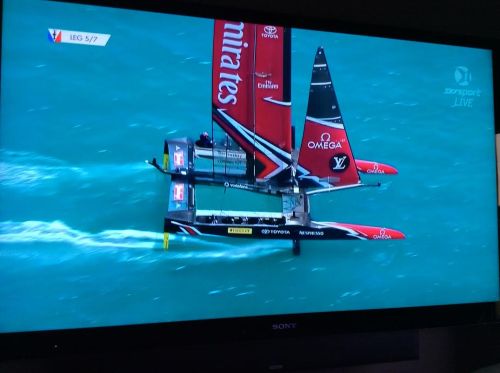 Since June 17th this elderly New Zealand woman, along with most of the rest of the inhabitants of our country, have been transfixed by the sailing going on off the coast of Bermuda.  And today, for the third time, New Zealand won the America’s Cup.  It was a really fantastic win.  Team New Zealand beat Oracle, the USA team by 7-1.  So no doubt who the winner was.

End of bragging, for today at least.  No promises for not more to come.

WOW how does a 15-year-old from far away New Zealand take on the talent of the women’s golfing world and win?  This young school girl Lydia Ko from the North Shore of Auckland not only beat the leading professional women players but beat them by three.  What a feat for this talented young woman.  She is the youngest to win the Canadian Women’s Open.  Click here for the full story of this achievement.  I just came to make the cut and play the best,” Ko said in a television interview. “I won and I’m going to get the trophy, and it’s amazing.”

And what a joy to watch her play.  She certainly appears to enjoy herself as she smiles and laughs with her caddy and those around her.  And the absolute commitment she has shown is totally amazing in one so young.  She has said that she will not turn professional yet as she has an education to complete.  Apparently she has her sights set on attending Stanford University.  I am sure with the determination she has shown up to this point, she will succeed in getting to her chosen seat of learning.

For no reason at all, when I saw the clip of the win on the local Network News I thought of William Blake‘s “To See a World in a Grain of Sand”.  Do you know this poem?

“To see a world in a grain of sand
And a Heaven in a wild flower,
Hold infinity in the palm of your hand
And Eternity in an hour”

I think at the time of being handed the cup – and it was a very large cup for this slight girl to hold – she must have felt that she was holding infinity in her hand.

I have no doubt that the future for Lydia Ko will be exciting and only limited by her will to succeed.  Well done Lydia!

And I can’t close this post today without a heartfelt plea that all my blogging friends in the path of Hurricane Isaac are taking care.  May you all keep safe and my hope is that this tropical storm will not wreak havoc in its path as so many have before it.

And my sister and friends both in real life and in the blogosphere – I hope you are all safe after the flurry of earthquakes reported today.

And wherever you are, whatever Mother Nature is throwing at you, I do hope that you remain safe.

Along with much of the free world, I have checked in to watch some of the Olympics.  I must admit here that I didn’t watch all through the opening ceremony because I guess I have a short attention span.  But I did cheer (albeit in my head) when the New Zealand team marched into the stadium and then again when the England team arrived.  You see, I have definite divided loyalties here.  Can you image what happens when NZ plays England in a test match.!  Canada of course, also got a cheer from me.

I have seen the James Bond and the Queen skit of them arriving in a helicopter and think it was fabulous.  I think the Queen enjoyed it too.

Today we had the spectacle of that road race and wasn’t that exciting.  Who would have expected that result?  England were tipped to bring home the medals.  Congratulations to Kazakhstan wonder Alexandr Vinokourov for winning the gold medal.  Such a long ride and those young men all looked so fresh, fit and healthy at the end of the 5 plus hours.  Our hope Jack Bauer, came only tenth but that was a sterling effort on his part.  Apparently he was fighting cramps but when asked if he still harboured hopes of a medal in the final stages, Bauer said: “Of course I do”.

We cheered on our NZ rowing pair who sliced 6 minutes off the world record – and these two rowers haven’t been beaten since they came together in 2007 winning 16 major titles in that time.  So although this was only a heat, we have great hopes for a gold here.

As you know from previous blogs, I am a Londoner and even though I live 12,000 miles away I am still proud of what has been achieved in my ‘home’ city.

The last time the Olympics was hosted in London was 1948.  London and Londoners were war-weary and concern was expressed at how the Olympians would be fed and housed.  Now all that is changed.  According to the Los Angeles Times “London is one of the most cosmopolitan cities in the whole world”.  Please read the full report here.

But for me, the most impressive thing is how they have turned an almost derelict part of the city into a games venue up there with any other in the history of the games.   I am sure that Boris Johnson (London’s Lord Mayor) and all Londoner’s wherever they live, must be very happy with this.  When I was growing up this whole area was full of factories and as these factories moved away the area became abandoned.  And now look at it.

I am looking forward to seeing more of the games, but intermittently as I do have other things to do with my time.  Luckily, I have the ability to record anything that I particularly want to see and so can watch at my time.

If you live in the free world (or anywhere that has radio, television or the print media) you will know that in approximately 28 days the 2012 Olympic Games will commence in London.

But did you know some of these bits of trivia?

So with this useless information you will surely beat all your friends
at Trivial Pursuit.

“My dear, here we must run as fast as we can, just to stay in place. And if you wish to go anywhere you must run twice as fast as that.”
― Lewis Carroll, Alice in Wonderland