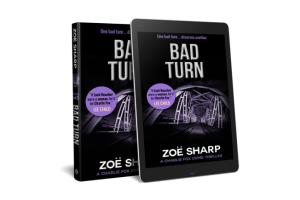 I had written and scheduled my post for the blog tour in advance as I was going to be away for a few days.  Earlier I had asked Zoe about this, one of my all-time favourite, series and she generously agreed to write something for my post. Here she gives us a hint of how she gets into a book and bit of a background into Charlie Fox’s character and the effects some of the situations in which she finds herself, have on her. So a second post for today.

And a really  big thank you to Zoe for this :

At their heart, the Charlie Fox novels are action-filled crime thrillers. But I hope that’s not all they are. Exploring the effect that the events of the stories have on Charlie herself, as well as on the other characters involved, has always been one of my main interests.

I like to know what makes people tick. How far they can be pushed. And, in the end, what makes them break.

It’s why my bad guys are rarely all bad. Everyone has shades of light and dark about them. After all, if you’re going to make your antagonists think they are really the heroes of their own story, you have to give them some reason to believe it. You don’t have to like them, as a reader, but you have to be thoroughly engaged by them.

Charlie usually arrives as an outsider into an already established group. Often she is seen as unwanted interference. She has to do her best to protect people almost in spite of themselves.

As was the case with BAD TURN.

Charlie walks into a complicated arrangement when she first meets Helena Kincaid. Without wanting to give any spoilers, let’s just say Helena is not having a good day.

Her husband, Eric Kincaid, wants to protect his wife above all else. He thinks making Charlie an offer she can’t refuse is the best way to go about this. And he is in a hurry to put his own choice of bodyguard in place, otherwise, he knows Helena’s overbearing father, Darius Orosco will step in.

Helena has been shielded all her life—almost to the point of suffocation. It’s hardly surprising she’s going to push back against anyone assigned to stick by her side, night and day. But Kincaid is between the proverbial rock and a very hard place. He wants to keep Helena happy but if he gives her the freedom she craves, how can he keep her safe? And if he can’t protect her, he’ll have her father to answer to.

Orosco is not a man to be taken lightly. Especially not when Kincaid not only married into the family, but into the family business as well. He went from employee to CEO almost overnight. Now it seems that his father-in-law might be regretting handing over control. Perhaps he’s not quite as ready for retirement as he thought.

Of course, it doesn’t help when you consider that Darius Orosco ran one of the largest international arms dealing operations on the East Coast—one that Kincaid is now in charge of. Kincaid wants to put his own stamp and style on the way he does business. Orosco is not keen on any changes to the old way—his way—of doing things.

The power struggle between the two men puts in jeopardy the one thing they both hold dear—Helena. But she is no passive virgin in the tower, content to sit meekly by and leave the decisions to the men of the family. No way. She wants control of her own destiny. In that respect, she’s very much her father’s daughter.

Nobody wants to admit they might be wrong, and nobody wants to back down, pulling the supporting cast in conflicting directions as they try to work out where their own loyalties lie.

All this is not destined to make Charlie’s job any easier. But then, her life would be boring if it was all sunshine and roses, wouldn’t it?”

And, thanks to Zoe click here if you want to read the first three chapters of BAD TURN

Zoë Sharp created the no-nonsense heroine of her highly acclaimed Charlotte ‘Charlie’ Fox crime thriller series after receiving death-threat letters as a photojournalist.
She opted out of mainstream education at the age of twelve and wrote her first novel at fifteen. She has been making a living from writing since 1988.
As well as her award-winning series, she has written standalone works, collaborations with espionage thriller John Lawton, and numerous short stories.
Her work has been used in Danish school textbooks, inspired an original song and music video, and been optioned for film and TV.

A new Charlie Fox Book – the 13th in the series. Yes really!

I posted on this book on my other blog, Books&morebooks on July 31 after receiving my ARC copy. As always, I was excited about the book and thoroughly recommend it.

At the end of the last book (No 12). Charlie gave notice to her Boss, Parker Armstrong and as a consequence has no job, nowhere to live and because of a non-competition clause in her contract with Armstrong Meyer, she can’t get another job in close protection in the US. So we find her house sitting in rural  New Jersey, bored with this dull life so different from what she is used to.

However, one day she drives into an ambush and immediately jumps into protective mode, not knowing who the ambushed victims are and as she is unarmed, risking her own life.  Her firearms were returned to Armstrong when he gave her notice to vacate the apartment in which she was living

It happens that the ambush victim is Helena, wife of a well-known arms dealer, Eric  Kincaid and because of the ambush, Charlie is offered the job of protecting the wife. She has no option but to agree. The owners of the house she is house-sitting are due back from Europe shortly and she has no other job opportunities on the horizon. To continue reading click here.

So let’s see what others on the Blog Tour are saying: 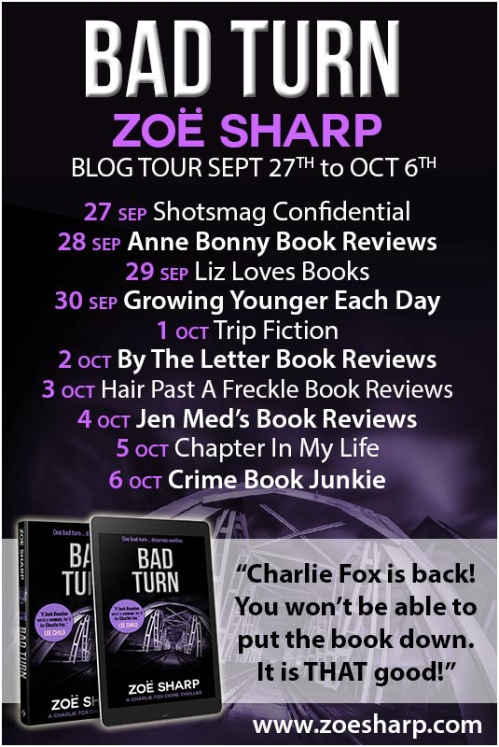 Zoë Sharp created the no-nonsense heroine of her highly acclaimed Charlotte ‘Charlie’ Fox crime thriller series after receiving death-threat letters as a photojournalist.
She opted out of mainstream education at the age of twelve and wrote her first novel at fifteen. She has been making a living from writing since 1988.
As well as her award-winning series, she has written standalone works, collaborations with espionage thriller John Lawton, and numerous short stories.
Her work has been used in Danish school textbooks, inspired an original song and music video, and been optioned for film and TV. www.ZoeSharp.com