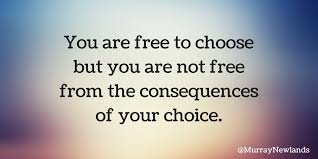 We not only have abandoned rightful consequence we have suspended the due process of justice.  Guilty on accusation.

Rampant accusation and rampant and often illogical consequences.  People are guilty on accusation.

Matt Damon made a logical statement and was castigated.  Not only is the right to free speech gone (unless you are a white supremacist speaking at some college aimed at creating chaos then all bets are off), individual rights and freedoms have been relegated to the gates of hell.

The President of the United States boldly lies, denigrates humanity, and abuses and disrespects many, not the least being women, without consequence, and has made Alternative Facts and misrepresentations of truth and decency acceptable.