Greetings from the Middle of Middle Earth

The Hobbit fever/mania has been building up here in Wellington, New Zealand culminating in the world premier of The Hobbit today.  And according to our daily paper today’s date is Hevensday, Blotmath 28,2012.

To get into the spirit of things today we went for a walk to see for ourselves and to enjoy some of the excitement.  We walked through the crowds gathered at the side of the red carpet that has been laid along Courtenay Place in the central city.  It was a beautiful Wellington Day – as we say “You can’t beat Wellington on a good day” whether we are talking about our weather, our sporting heroes or our movie friends.

Some 100,000 fans have flocked into our city to see the stars arrive for the premier.  Streets around The Embassy Theatre are closed to traffic and many people have firmly staked their place along the red carpet having been there since early yesterday evening hoping to get really close to the stars who will walk along the red carpet to The Embassy where the premier will be shown.  Click here to see what we are watching at 6 pm on Wednesday 28 November 2012.  Earlier Sir Peter Jackson talked about making the movie, then a chat with Sir Peter’s daughter, Kate and some of the cast members and also some of the others who were involved in bringing this story to the screen.

All around town, there are flags declaring this is Middle of Middle Earth, people are sporting tee-shirts also declaring this, NZ Post has a series of stamps both to use and to keep commemorating this event.  Passengers flying into  Wellington International Airport are greeted by a gigantic sculpture of Gollum 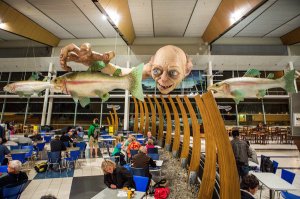 and even the National Carrier, Air New Zealand has had a 777-300 aircraft painted  in Hobbit-theme initially to bring cast and crew to Wellington for the premier, and after to fly the Auckland Los Angeles London route.  They also released the “Unexpected Briefing” in-flight safety video – viewed over 10 million times on YouTube.  If you haven’t seen it, click on the link now.  It’s really innovative.

Last week a huge installation appeared on the verandah of The Embassy Theatre – including a Gandalf sculpture and what appears to be the front of a Hobbit house.  Again traffic was stopped in the surrounding streets to allow this installation to happen.

So now we are off to get together a simple meal so we can enjoy the rest of the partying.  As my friend lives only one street away from Courtenay Place, the centre of the activity, we can hear the noise from his apartment.  But it is a very happy noise telling us that thousands are enjoying themselves and the spectacle.

Like Loading...
This entry was posted in Movies, Uncategorized and tagged Movie, Peter Jackson, The Hobbit, wellington, wellington new zealand. Bookmark the permalink.

17 responses to “Greetings from the Middle of Middle Earth”