If you have read any of my posts you will know that I am a Londoner, and although I haven’t lived in that fascinating city for some 50 plus years I still think of it as home.

I was born shortly before the Second World War broke out and have described how I grew up during the bombing by the Luftwaffe, thinking this was how all people lived.  And it wasn’t until many, many years later while talking to a German Pastor over coffee, that I realised that there were also German children growing up under the same conditions.

Earlier in the year, I wrote a post about evacuation but mainly about those children who were sent to Australia without their parents’ knowledge or consent – Oranges and Sunshine .  A plan that while made with good intentions (?) went horribly wrong.

Because we lived in the East End of London and the Docks were the target of the bombing, many children were evacuated to the country out of harms way.  But Mother decided we would all stay together; I think she didn’t trust strangers to look after her three precious daughters.  We did go to stay with an aunt in Nottinghamshire for a short time, but the aunt wasn’t Mother’s favourite person and we three were miserable so the stay was very short.

The plan was to evacuate the  school aged  children (without their mothers)  from the East End of London and areas around the docks in Liverpool and Glasgow and while it was made with good intentions it went horribly wrong in places. Mothers with children under school age, children and expectant mothers were  encouraged to evacuate.  Official figures put the number of evacuees at:

Some of the evacuees had a great time, but of course, many were homesick and ran  back home.  Most hadn’t been away from their homes at all and many had never seen grass or cows.  It must have been a rude awakening.  And some were very badly treated.  They were used as unpaid household and farm help and many were kept in deplorable conditions.

The decision to evacuate was made by politicians and people who had no concept of how many children lived in the poorer areas of the land.  These decision makers were used to sending their own children (or at least their sons) away to boarding school at the age of 6 or 7 and they had no idea that this would be a totally foreign concept to most of the population.  But the decision was made. 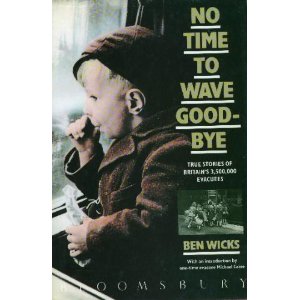 In 1990 on a sunny afternoon in Toronto we were invited to accompany our hosts to a party on a launch.  Here we met Ben Wicks, a journalist now a Canadian  who had been evacuated when he was 12  and had decided to write about not only his own experiences but also those of other evacuees.  He posted advertisements in papers in the UK, Canada, America, Australia, New Zealand and South Africa asking for those who had been evacuated to contact him.  He had an overwhelming response.

The book brings history to life as told by the people who lived this experiment and makes compelling reading.  The twins who were sent to separate houses, the boy who slept under the stairs and had to have the fire lit and the kettle boiling for breakfast before the family rose in the morning and even then he only had what was left after the family had eaten, the brother and sister taken to a farm and who slept with the animals in the barn; and then there were those who were treated beautifully.  The two brothers who were treated as the two sons the couple never had and with whom the brothers kept in contact for many years, and the young girl who was given piano lessons.  One of the famous people who was evacuated is Sir Michael Caine  (aka Maurice Micklewhte).  Sir Michael’s  family lived in Southwark, South London, and he was evacuated when he was six and remembers being one of the “filthy kids from London with funny accents.”

In the book this greatest movement of people that Britain ever experienced is recalled  in interviews Ben Wicks conducted with those evacuees who made themselves known to him.  And Wicks noted that an important repercussion to the evacuation  was heightened political awareness of the injustices of the British class  system.