Fiction for the Fearful

“If we had to say what writing is, we would define it
essentially as an act of courage.”
Cynthia Ozick, American-Jewish short story writer,
novelist, and essayist. 1928 –

Many years ago when I was completing a creative writing course one of the exercises set for us was to write a letter to ourselves, either our older selves or our younger selves.  The letter would be mostly fiction but of course, interspersed with necessary facts.  I haven’t thought about that course or the task for some years. 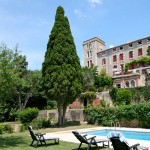 But today, when I had time to ‘noodle’ ( my sister’s word) around the internet I found some interesting courses being run in France and thought how lovely it would be to attend a creative writing course in a château in France.  Patrick Gale is not a writer whose work I know but I think I would be very pleased to get to know him and his writing by attending a course held in the Chateau Ventenac on the banks of the Canal du Midi in the Languedoc Region.

But now back to the creative writing course held in Wellington, New Zealand.

Imagine a dark Tuesday evening in the middle of winter.  The course was run at the local University in one of its older buildings.  I seem to remember that it was always cold in the study room; perhaps they turned the heating off once the main body of students had left for the day.  Most of the building was deserted and the cafeteria was closed for the day so no cups of hot coffee for us.

Fifteen of us started the course that was run by well-known NZ writer Bill Manhire, but in memory only about 11 of us completed it.  This was no holiday course.  It was hard work.  The fact that such a large percentage of people dropped out was disheartening.  Bill was rather a hard taskmaster but he was inspirational.  Praise wasn’t lightly given and so was all the more welcome when it came one’s way.

Anyway, back to the task.  I chose to write as a 70-year-old to my younger self.  Little did I know then how quickly the years would pass until I became a 70-year-old.  I wrote as a fond (maiden) aunt might; praising my young self and encouraging her/me on my life journey.  I don’t remember quite what I said – we didn’t all have laptops then – but I do know that having completed the task I thought how nice it would be to receive such a letter from an aunt or a caring relative.

That then made me think of other letters I might write.  In fact, it encouraged me to write to my parents thanking them for the childhood my sisters and I had experienced and for the love and caring they showered upon us.  I knew, from talking to others, that not everybody had been so lucky and I thought it important to let them know that I appreciated them.  And now that they are no longer here I am so very glad that I did write that letter.

And now I ask you “Is there somebody to whom you would like to write a letter before it is too late?”  I think there is nothing more cheering than receiving a handwritten letter from a friend or relative.

8 responses to “Fiction for the Fearful”