On Tuesday evening we had an earthquake.  Quite large as these things go.  In fact is was 7 on the Richter Scale. 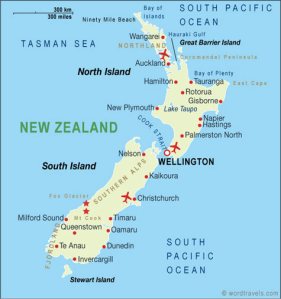 The long, rolling quake, at 230 kilometres deep, was centred around New Plymouth (that’s the sticking out bit on the western side of the North Island)  and was felt throughout the lower North Island and upper South Island. We are told that buildings shook and evening workers reported being shaken about in their offices.

The first I knew about this large shake was when a friend called me shortly after 10.40pm to ask if I was alright.  “Yes” I replied “Why wouldn’t I be?”.  You see I hadn’t felt a thing but so far haven’t spoken to anyone else who was unaware of the quake.  So what does that say about me?  Oh Lotte rushed into the bedroom where I was preparing for bed, but I thought it was because she had just realised I wasn’t in the room with her.

New Zealand has always been known as the Shaky Isles and as Wellington sits firmly on a fault line we are all aware that at some time – whether now or in 100 years time – the city will experience a large earthquake.  However, this latest one, felt by so many did little damage.  And it was larger than the one that devastated Christchurch and resulted in the death of 185 people in February 2011.

We now have a host of predictions about earthquakes and our preparedness (or lack thereof).  We are told that it could take 40 days to restore the water supply to even a basic level, while road access could take up to 120 days, according to “worst case” predictions presented to the region’s Civil Defence Emergency Management Group, following Tuesday’s quake.

That could leave Wellington residents or commuters trapped in the city for months, and dependent on water rations being distributed by authorities for about six weeks.  Grim predictions indeed.

But for most of us, we go about our usual business heedless of the many minor quakes that shake our city regularly.  But are we being foolhardy?  and how many of us have survival items readily available in case of such a disaster?  I suspect that if I did even a small poll amongst my friends and family, most would be aware of what should be in a disaster kit, but many would not have made any provisions for surviving a disaster. 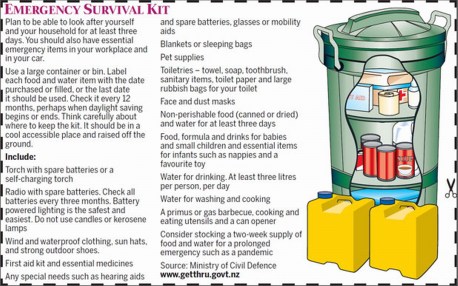 “We live in the midst of alarms; anxiety beclouds the future; we expect some new disaster with each newspaper we read.”
Abraham Lincoln

I choose how I will spend the rest of my life

Making memories one day at a time