Salmon Fishing In The Yemen

Cinema should make you forget you are sitting
in a theater.
Roman Polanski

Have you seen the movie Salmon Fishing in the Yemen?  This British 2011 film has just arrived on our shores.  A local Rotary Club had it as a fund raiser and we went along to see it tonight. 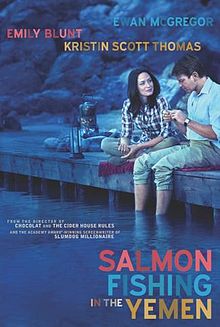 Britain’s leading fisheries expert, Dr Alfred (Fred) Jones, is approached by a consultant representing a wealthy Yemeni sheik  to help fulfill his vision of bringing the sport of fly-fishing for salmon to the desert.   Needless to say, he thinks the project is absurd and unachievable – salmon are cold water fish and they need water.  The desert is hot and dry.  Obviously unachievable.  He declines to help.

But the Prime Minister’s press secretary is looking for a ‘good news’ story and when she hears of this project decides that it is just what the people of the UK need to take their minds away from the grim news coming out of Afghanistan.

She pressures  Fred into working with Harriet, the consultant and the sheik to implement the project. Over time, he gradually comes to believe in the sheik’s quest and of course, fall in love with the lovely Harriet.

Things become complicated when immediately after he declares his love, Harriet’s boyfriend arrives in Yemen (courteousy of the British Government via the PM’s press secretary).  He had been missing in action in Afghanistan and presumed dead.

For the ending of this delightful tale you will have to see the movie yourself.  Suffice to say there is no violence, some lovemaking, a smidgen of coarse language (from the press secretary), some skullduggery but in all it deserves its “M” rating.

The main characters are played by:

I whole-heartedly recommend this movie as a welcome break from all the sex and violence being portrayed in most of the other movies currently on offer.

If you have built castles in the air, your work need not be lost; that is where they should be.
Now put foundations under them.
Henry David Thoreau

14 responses to “Salmon Fishing In The Yemen”