Today I had brunch with a group of women.  I knew one of the four women but the other three were strangers to me.

These women meet on a regular basis for brunch and French conversation and I was invited to join them today.  Hopefully, they liked me enough to allow me to become part of this group.

Selection of bread at Simply Paris

My French conversational skills are quite limited, but so then were three of the others.  The fourth woman was the coach/teacher.  This woman was born and raised in Skopje, Macedonia and after deciding that Economics was not for her, she changed to Languages and in particular French for her degree.

She arrived here in the mid 1990s with her two small children and husband, speaking no English.  How hard life must have been for her then.  A new culture, no friends, no way of communicating and two little children.  But  she is a survivor and although I have only met her just once, this is very obvious.

She decided to share her love of the  language with others and runs a series of informal classes teaching others to communicate in French.

As we were leaving and standing at the counter to pay, a complete  stranger came up to me and said “I think you look great”.  What a lovely and totally unexpected compliment.  It rounded off a very pleasant couple of hours.

Do you ever think of paying a stranger a compliment?  I have been known to on occasions but with the effect that this woman’s words had on me, I know that I shall be paying compliments to strangers again.

Then it was time for Lotte and me to go for our walk.  As it was such a lovely day we ventured out to the south coast – 10 minutes in the car. 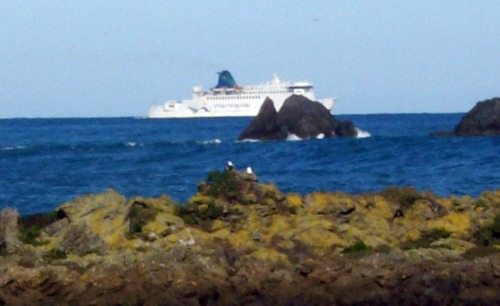 We saw the InterIslander going out from Wellington harbour.  On such a beautiful clear, sunny afternoon  there would have been fantastic views and opportunities for photographs from the upper deck of the ferry.

This is very rugged coastline and quite dangerous to shipping. This is where one  of New Zealand’s most talked about maritime disasters occurred.  In April 1968 Cyclone Giselle hit Wellington at the same time as another storm which had driven up the West Coast of the South Island from Antarctica. The two storms met over the capital city, creating a single storm just as the inter-island ferry Wahine was crossing Cook Strait.  51 people lost their lives in the sinking.  Click here for TV coverage of the disaster.  It is interesting to hear the coverage and the frightfully BBC type reporting and voice.

We just love signs in New Zealand and this one caught my eye.  Apparently the Moa Point Wastewater Treatment Plant occasionally discharges a mixture of fully and partially treated sewage through its ocean outfall pipe into Cook Strait.  Hence the warning. 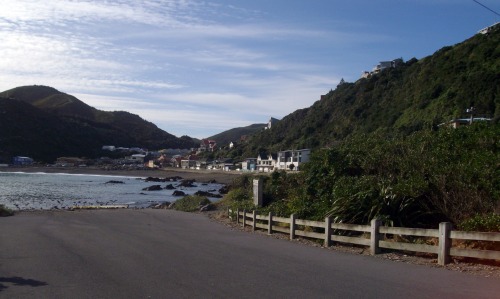 These houses clinging to the shore and the hillside are only about 10 kms from our bustling Capital city.  Wonderful on a day like today but I imagine quite frightening in one of the many strong southerly winds that hit this coast.

On September 1st (before my gmail problems) Hallysann at Photographic Memories posted some photos of covers and so I thought I would add one of ours.  It’s nowhere near as attractive as those that Hallysann found wandering around Oxford but it’s the best I can do for today. 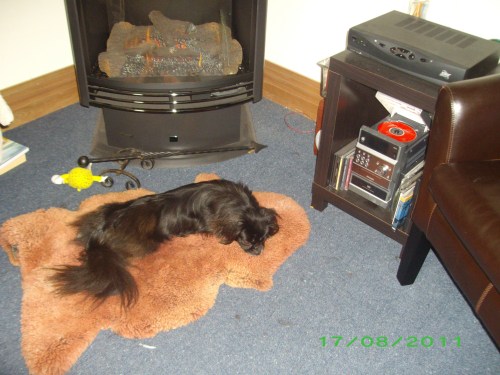 By the time we had walked for about 30 minutes and Lotte had done some socialising with other dogs she met on the walk, she was ready to return home.  She is now ensconced in front of the fire – her usual place.

I’m an excellent housekeeper. Every time I get a divorce, I keep the house.
~ Zsa Zsa Gabor