The Godwits Are Here 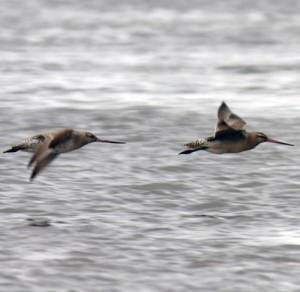 We know it’s spring here when the first Bar-tailed Godwits appear in the South Island.  The Bar-tailed Godwit is the holder of the longest non-stop flight by birds covering about 11,000 km from Alaska to New Zealand. And then at the end of our summer, they do the return flight, another 11,000 km back to Alaska to breed.

In preparation for this long, non-stop flight to New Zealand, that can take as many as 10 days, the birds stock up on fat during the early fall in Alaska.  They use their pencil-thin bills to gorge on tiny clams, the size of a fingernail, found in the mudflats of south-west Alaska.

They put on so much fat that their body shape is totally changed before they start their journey and according to Bob Gill, who studies shorebirds at the USGS Science Centre in Anchorage, “They probably use all of that fat and then burn protein (muscle) for added energy.”

Gill and his counterparts in New Zealand and Australia, have been tracking the flights of these birds for several years.  They have proved that the birds make their migratory flights without stopping as in an experiment two years ago, they implanted satellite transmitters into several of the birds.   And they say that no other creature has ever demonstrated such a feat of endurance.  Read more about these birds at the Alaska Science Forum 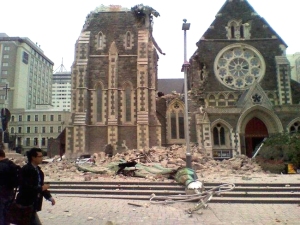 Traditionally, when the birds are first seen in the South Island of New Zealand, usually in the second or third week of September, the bells of Christchurch Cathedral ring out to welcome them.  However, because of the major earthquake in February, the bells are out of commission and this year the bells of another church in Christchurch were rung.

So the headlines in the Christchurch Press today read “The arrival of the  Godwits in Christchurch has been marked by the bells of St Paul’s Anglican Church this year.”

The organiser of the bell-ringing at St Paul’s, Bill Thew, says the church’s bells are similar to those at the cathedral and it takes eight people to toll them. He also said that the church had suffered some damage in the earthquake but the bell tower is unscathed.

As an aside, does Sarah Palin claim the Godwits as part of her constituency of voters?

At about the same time that the Godwits were seen, another visitor was arriving some 360 km to the south.  And the bells rang out in Dunedin, marking the arrival of a Royal Albatross (tagged and named Rob ) at the world’s only mainland breeding colony at Taiaroa Head.

It was the second year running that Rob was the first springtime arrival.

“After spending almost a year at sea and with most birds circumnavigating the southern hemisphere in that time, arriving back to Taiaroa Head within a few days of their previous arrival date often astounds me,” Department of Conservation ranger Lyndon Perriman told the Otago Daily Times newspaper.