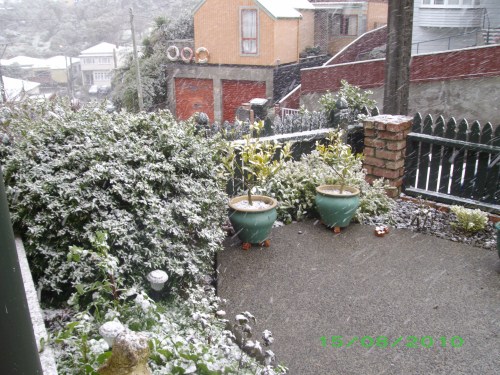 Snow fell here in Wellington both yesterday and again today.  We are so unused to this that the neighbours were out with cameras this morning shooting the strange white stuff falling in our streets. 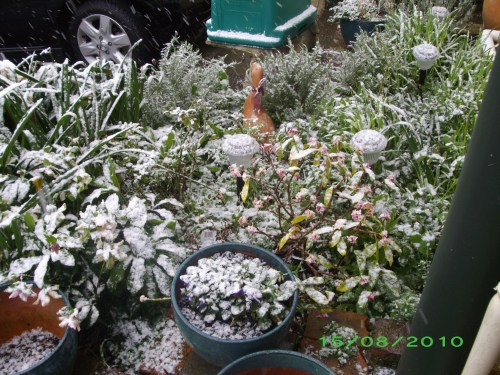 I thought then to try my hand at an Etheree * but then just started to write and what I ended up with was my own form of writing.

One word on the first line, two on the second, three on the third until the tenth line has ten words. Have I discovered a new form of poetry or is this just something from my head?  In any event I enjoyed this challenge.  So,

Snow
gently falling
from leaden sky
and finding places where
no snow has been before.
Now all is covered in white and
looks new and quite strange and different
And while it lasts it brings strange shapes
to this familiar world now changed for a while
Until it melts and all returns to normal once again.

Actually, I like the shape of this and whether it is a recognised form  or not, I think I shall continue to use it.

Postscript – after publishing the post I found this site that talks about ten lines of poetry.

*The basic etheree form has ten lines, the first consisting of exactly one syllable, the second line of two syllables, and so on until the last line’s ten syllables. An etheree can also be reversed, starting with ten syllables and ending with one.