“Twenty years from now you will be more disappointed by the things you didn’t do than by the ones you did do. So throw off the bowlines, sail away from the safe harbor. Catch the trade winds in your sails. Explore. Dream. Discover.”  Mark Twain

August in New Zealand is deep mid-winter.  Each year, my husband and I would take ourselves off for a few weeks or occasionally months, to get away from the dreary days of winter.  And way back in 1989 we chose to go to Bali in Indonesia.

We had been several times before and had thoroughly enjoyed the place and the charming people of that island. 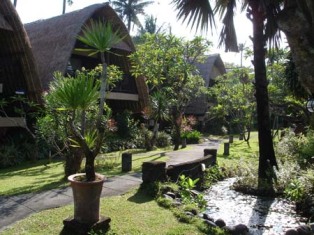 We decided on a simple Balinese hotel for one week.  The Paneeda View hotel was recommended to us by our travel agent.  It was set right on the beach and was a lovely, gentle way to start our holiday.

This was to ne followed  by a week at a 4 star resort on Lombok Island (the only resort on the island at that time). 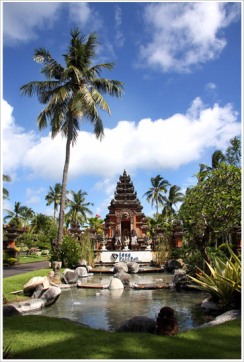 and a final week at a fantastic hotel at Nusa Dhua.

The Peneeda View Beach Resort in Sanur was idyllic.  Very laid back and charming.  Unfortunately, several years later this area of Bali became infamous for the Bali Bombings that killed 202 people many of them overseas visitors.

However, when we were there it was a lovely, peaceful part of Indonesia in which to holiday.

We had explored the island on previous trips including Ubud the arts centre of the island.  We had seen the rice paddies set in terraces on the high slopes and watched the ducks being herded to market along the streets.

So this time we decided to venture further afield to Java.  I had heard of Borobudur the 9th Century Buddhist Temple in Jogjakarta and the biggest in the world.   I knew that it had been constructed as a ten-terraces building and rose to 42 metres.  The first seven terraces are in a square form, two upper terraces are in a circular form and the top terrace is where the huge Buddha statue sits facing west.

One has to walk clockwise from the entrance to the temple to understand the sequence of the stories that early sculptors set into the concrete.

We got up really early to cram as much into our day as possible.  We were told that one simply turns up at the airport – no pre-booking –and boards a plane.  We bought the tickets and were given 2 snack boxes.  Then the plane arrived and the locals rushed to the gate to grab a seat.  We were pushed and shoved and eventually we found two adjacent seats.  The seat back on mine was broken and I had a most uncomfortable journey.

The hostess passed around small packs of lukewarm ‘juice’ and then we opened the snack packs.  We were each faced with a curled up white bread sandwich and a soft biscuit.  Needless to say neither of us ate that ‘lunch’.

When we left the plane (having left behind the snack packs of course) we were accosted on all sides with noise, people and smells.  Traffic in Java is manic.  Six or seven lanes moving each way, ignoring traffic signals, other traffic and pedestrians. 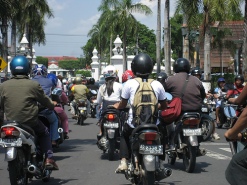 But all was forgotten and forgiven when we got our first sight of Borobudur. 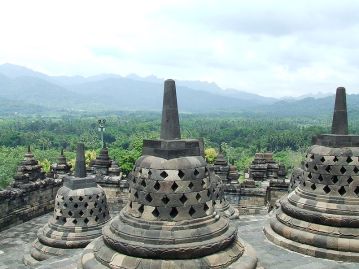 What a magical sight and surely this building must rank up there with the pyramids for the sheer scale of what was achieved all those years ago.

Our guide told us it was is a shrine to Buddha and was built over a period of some 75 years in the 8th and 9th centuries.  Constructed out of an estimated 1,600,000 blocks of volcanic stone, dredged from the river and assembled solely by human labour, and is famed for its 1,500 intricately carved reliefs, covering a total length of five kilometres end-to-end.

The first archaeological study of the site was initiated in 1814 by Sir Stamford Raffles, founder of Singapore. First restored in 1907, the monument suffered from neglect and war and was almost rebuilt in the 1970s under the guidance of UNESCO, who designated Borobudur as a World Heritage Site. The massive restoration process involved the removal and refurbishing of over one million blocks, rebuilding the foundation and adding drainage systems.

When we visited one could get inside the temple and also climb the hundreds of steps to the top layer.  Unfortunately, my late husband was unable to climb and so stayed down enjoying the sunshine and the views.

I still think about this magical day.  The return to our hotel was equally as frenetic, but it was all worth it to see this magnificent building.

And now some 22 years later, I still get ‘goose bumps’ when I think about Borobudur.  It ranks with my first sight of the Grand Canyon for sheer, breathtaking beauty.

“I can’t think of anything that excites a greater sense of childlike wonder than to be in a country where you are ignorant of almost everything.”
Bill Bryson, American travel author