“Her life was so sad that it was almost too beautiful to be true” Sacha Guitry (Alexandre-Pierre Georges (Sacha) Guitry)   French stage actor, film actor, director, screenwriter, and playwright.  1885 –  1957

Edith Piaf is my favorite singer of all time.  I don’t remember how or when I heard her first but for as long as I can remember I have had a fascination with her and her life.

She had this amazing voice that spoke to directly to you even if you didn’t know enough French to understand what she was singing about.  Of course, we all know “Non, je ne regrette rien”   and many of us have seen the film made of her life “La Vie En Rose” 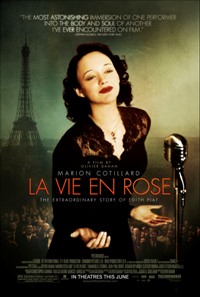 I have several books written about her life.  One I particularly like is by her half-sister Simone Berteaut.*  In it she tells of their meeting when Edith was fifteen and she was a couple of years younger.  It was at Alverne’s an acrobat friend of their father’s.  Simone describes the meeting:

“I was pleased to be going to Alverne’s.  His apartment was scruffy but we ate well there.  That was all I cared about, I didn’t think about meeting Edith.

“It was a poorly furnished, filthy little room.  There were some rings hanging in an empty door-frame.  A shapeless creature in a boy’s shirt was suspended from them.  It would never have occurred to me that this was my sister had I not seen two little white hands poking through the shirt sleeves.

Edith invited Simone to join her in her life singing in the streets and that’s what they did.  As Simone says in the book “I put my hand in hers and we went off to sing in the streets”.  It is amazing to us that these two young girls were on their own and nobody cared what happened to them.  Remember Simone was not even 13 years old.  So they sang on the streets, mostly Edith sang and Simone collected the money and they hustled what they could.

The life they lived was not healthy or even sane but they survived.  And they continued to live this life until Edith  was “discovered”  by  Louis Leplé and started to sing in his nightclub and it was he who gave her the nickname ‘Little Sparrow’.  The fame and notoriety came as did the money, the booze, drugs, the men but through it all they appeared to have fun.

Two serious car accidents in 1951 led to a morphine and alcohol addiction that left her whole life running out of control.

Piaf claimed that she couldn’t live without a man in her life and she was rarely without one.  She married twice.  First in 1952 to Jacques Pils, a French singer and actor.  But despite it seeming to be a happy marriage it ended in divorce in 1956.

She later married  Theo Sarapo, twenty years younger, a handsome Greek.  This relationship ’caused more gossip than any of her other men.” But one year later , in 1963 Piaf was dead.

Her last appearance was at the Paris Olympia, racked and hunched over with pain and barely able to stand. Her last recorded song was “L’homme de Berlin” in 1963, the year of her death. She died in poverty and under Gallic law her husband inherited her “forty-five million francs worth of debts.”

Piaf’s funeral was massive yet, because of her lifestyle, she was forbidden a Mass but  Parisian traffic was completely stopped on the day because  the funeral.

*Note – In the almost 30 years since I first bought and read this book much has been written and said about Berteaut and her relationship with Piaf.  It has been claimed that they were not sisters and that Berteaut simply latched onto Piaf as a kind of parasite.  Whatever the true relationship was I still love the book.

“No! No regrets
No! I will have no regrets
All the things
That went wrong
For at last I have learned to be strong

No! No regrets
No! I will have no regrets
For the grief doesn’t last
It is gone
I’ve forgotten the past”