Mirth and Mayhem at the Mythical Mountain

Winter is the time for comfort, for good food and warmth, for the touch of a friendly hand and for a talk beside the fire:  it is the time for home.  Dame Edith Sitwell, English poet and critic 1897-1964

Lotte and I have just returned from a few days at staying with a friend at her mountain home in  Ohakune in the center of the North Island.

We left home on Sunday morning in the rain.  And I was not surprised that it was raining as on every occasion I have visited the mountain house over the past 24 years IT HAS RAINED!  Our ongoing joke is that the mountain is a myth and never to be seen. 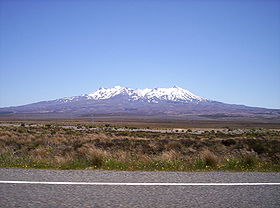 Mt Ruapehu in summer per Wikipedia

The lodge is called Duck Crossing and sits on the access road to the ski-field so Lotte had plenty to look at. 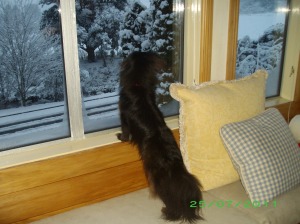 Watching the world go by

There was one other guest and we had a very pleasant afternoon and evening, catching up and regaling each other with the gossip.

View from the living room

We went to bed on a very still night.  No rain and no wind.  The next morning we awakened to a winter wonderland.  A perfect sight and one that Lotte of course, had never seen.  It was a joy to watch her put a foot out of the door into the snow that came up to her tummy.  But brave little girl that she is, she ventured out into the unknown and thoroughly enjoyed herself. 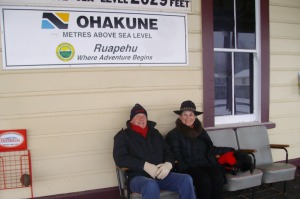 Waiting at the station

We dressed up in our cold weather gear and went for a walk after lunch.  Children had been busy on the park building snowmen.  There was a group of young men and women building a ramp for their snowboards (I guess the mountain must have been closed).  Lots of laughter, fun, music and good humor.  It really is great to see young people enjoying themselves in the fresh air and not causing any disturbance to anybody else.  they asked us if we would like to join them, but prudence prevailed and we declined the invitation.

It had been snowing gentle flakes on and off all day and it started again.  How lovely to walk, all rugged up and toasty warm feeling the flakes settle on the face and eyebrows.  Lotte, who hates to be wet, was enjoying every minute of this walk.  Of course, she was the centre of attention in her bright red fleece. 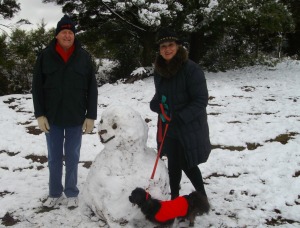 Then hot chocolate at the local hotel where there was a roaring fire and loads of people.  Most of them would be wishing they could get up the mountain but I was happy just to be there.

Then back to the lodge.

Guests were invited for drinks so the huge fire was lit and the house looked particularly welcoming.  So welcoming in fact, that the guests didn’t want to leave.  Growing up my family had the saying “Here’s your hat, what’s your hurry?” used jokingly.  And Here’s your hat fitted here well.  They eventually left and we had another lovely dinner  – did I tell you my friend is not only a great interior designer she is also a very accomplished cook?  Everything is done seemingly with ease and certainly with such aplomb.

So another day on the mountain came to an end.  Watch this space for the excitement the next day.

But friendship is precious, not only in the shade, but in the sunshine of life, and thanks to a benevolent arrangement the greater part of life is sunshine.
Thomas Jefferson

16 responses to “Mirth and Mayhem at the Mythical Mountain”