Our grandchildren accept us for ourselves, without rebuke or effort to change us, as no one in our entire lives has ever done, not our parents, siblings, spouses, friends – and hardly ever our own grown children.  ~Ruth Goode, author 1902-1997

I have had a really special day today.  Three of my four grandsons have been here and what a joy they are.

They range in age from 12 to 16 and still get on well.  The 16-year-old is particularly careful to include the youngest one in everything, although he is well able to look after himself.

Having picked one up from his mother’s office and the other two from the train station we set off for the garden centre to collect the final two bags of stones for the patio.  I was planning to use some of their time with me (and their energy) to get this job finished eventually.  It’s never too early to learn there’s no such thing as a free lunch.

Well…Granma was so busy talking that she got onto the motorway by mistake and had to drive miles out of her way before arriving at the garden centre.

Here we were greeted like long-lost friends.  Lotte and I have been regular visitors to the centre since the patio was first thought about.  And they recognized Jae (the youngest) from our last visit.  So, purchases made the boys loaded the bags into the back of my car and we set off for home.

They came in for a drink and biscuits before starting – don’t all workmen?  They certainly do here in New Zealand.  And for the next half hour, the street rang with their laughter as they spread the stones, filling in the blanks that Jae and I had missed last week.

James and Jae – the oldest and youngest working together 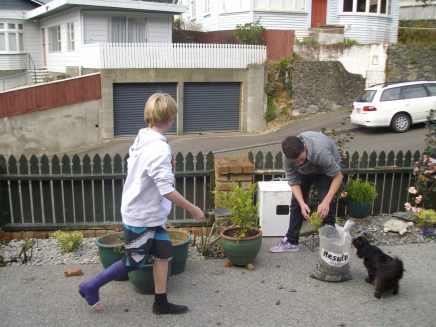 And four extra hands/paws are welcome

Rob beavering away but can’t we afford shoes?

Sharing his muddy hands with Granma!

Soon it was finished and everybody had a great time.  Isn’t it so true that many hands make light work?  And what joy to be surrounded by happy, laughing young folk.

Then lunch.  Easy to feed growing boys.  Plenty of sausages, buns, mayo and tomato sauce and the boys made their own hotdogs.  I demurred.  Hotdogs are not among my favourite things.

Now what to do for the afternoon?  They couldn’t make up their minds.  Of course, they were slightly constrained by the fact that Jae still had his leg in a cast.  So I made the decision.  Sir Peter Jackson and Weta, the animation and special effects company – Lord of the Rings, The Last Samurai, King Kong, Xena Warrior Princess among others – are based in Wellington and they have the ‘Weta Cave” a museum open to the public.  Strangely none of us had been there before and so we took ourselves off.

This was very interesting as it had models from all the films Weta and Sir Peter have been involved in and of course, they had many collectables for sale.

Three very well brought up young boys asked for nothing.  A big change from when they were younger.

Of particular interest to me was the short movie/DVD giving a behind the scenes look at Weta and interviews with the founders and directors of the company. 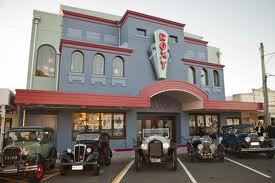 At the opening of the Roxy Cinema in April 2011

And then on to the Roxy Cinema.  This is another of Weta’s projects.

The old cinema had been abandoned years ago.  It was derelict and had been so for some years, following a brief period as a shopping centre.  The shops were very sad and there was no good reason ever to go there.

Several years ago the building was bought and saved from demolition by Jamie Selkirk, best known for his role as editor on the Lord of the Rings films. The building lay empty for several years during which time Selkirk won several Oscars.  He then enlisted the help of Tania Rodger, manager of Weta Workshop, with a view to rebuilding. And the final product can only be described as stunning.

In April, the ‘cream’ of Wellington society was invited to a gala opening.  The theme was the 1930s and as you can see from the photos even the cars were authentic.

The Roxy has a rather pleasant cafe on the ground floor.  So after touring around the cinema we sat for a breather – tea for Granma (well, I am English after all), coke for one boy, hot chocolate for another and for the third, and eldest and so sophisticated, iced coffee.

James has just finished a six-week course through school on making coffee – Barista training.   Apparently, this was an elective and he will get eight points for doing this course. When questioned he said he thought it was really for those boys who would not stay on for another year and might get a job making coffee.

Then, with his new-found knowledge, he regaled us with how one makes iced coffee and assured me that no, we couldn’t make one in the blender at home.  We need an espresso machine to froth the milk.  Don’t have one and am not about to get one.  Sorry, James.

So our adventures ended.  A trip home where they watched a DVD.  My son and his wife joined us for dinner and then later my daughter and her eldest son came in for a short time.  Drew had been competing in a water polo tournament in Auckland and Cate had picked him up at the airport and thought she would call in not only to pick up her younger son but also to catch up with her brother, his wife and their boys.

It was lovely to have both my children and all their children together.  A rare happening and a fitting ending to my lovely Granma’s Day.