I Dream of Hiking Into My Old Age

I dream of hiking into my old age.
I want to be able even then to pack my load and take off slowly but steadily along the trail.

One of the blogs I follow closely is Robin at Life in the Bogs and today she had this quote at the beginning of the post.  While I don’t hike any distance any more (did I ever I ask myself) and while I guess I have reached my ‘old age’ I love the sentiment expressed by Marlyn Doan.  I have never heard of this woman before but she certainly pushed a button for me.

I have posted before on some ‘older’ women and some men who achieve quite amazing feats of endurance at 80, 90 and even close to 100 years old.  What is it in their makeup that allows them to keep on keeping on?   When conducting my Memories courses I have visited many retirement homes and retirement villages where some appear to be just sitting back and ‘Waiting for God”.   I have friends who ask me why I am still so involved in many things instead of just enjoying my retirement.  I tell them that I am enjoying my retirement.

Here in New Zealand, we have a TV channel dedicated to UK Television so we get to see reruns of some of the old comedy programs. 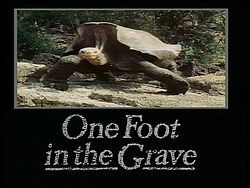 Have you heard of “One Foot in the Grave” – a sitcom featuring Victor Meldrew and his long-suffering wife, Margaret?  After being forced to take involuntary early retirement, the series followed Victor’s various efforts to keep himself busy, whilst encountering various misfortunes and misunderstandings. This program ran for 11 years in the UK.

Another comedy is “Waiting for God” set in a retirement home but the protagonists were two feisty oldies who wouldn’t buckle down to the quiet life that was expected of them.  Great television.

And I don’t feel old and I don’t know of anything I want to do that I am stopped doing because of my age.  Only thing I can think of is renting a car but that is easily overcome by taking out my own insurance.  See rental car companies don’t want to take a chance on my being doddery.  And they don’t even know me.

Anyway, back to the subject in hand.  I have produced my Bucket List so I do know what I still want to do before I leave this world.  And I want to do all these things and more.  Too many to list but I intend to do whatever I do joyfully and with as much fun as possible.  And I have no doubt I shall hike into my old age and hopefully,  grow old disgracefully.

Age is the acceptance of a term of years.
But maturity is the glory of years.
— Martha Graham