The stately homes of England
How beautiful they stand,
To prove the upper classes
Have still the upper hand.
Though the fact that they have to be rebuilt,
And frequently mortgaged to the hilt
Is inclined to take the gilt
Off the gingerbread….. Noel Coward

Would you like the rest of this ditty – click here for the video of Noel Coward singing his own song.

With nothing better to do on a winters Saturday night I turned on the TV.  Imagine my delight to find that there was a BBC program on my very favorite Stately Home in England – Petworth House. 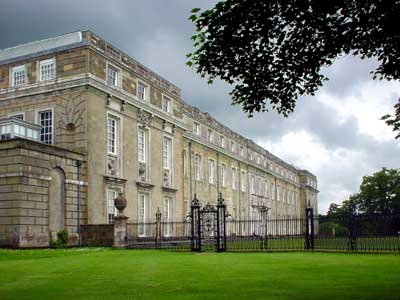 I first heard about Petworth from a former boyfriend.  I think we were both 15 and his Granny lived in Petworth.  A few years later I visited Petworth and saw the splendid house in all its glory.

This late 17th century mansion is set in a deer park artfully created by Capability Brown,  you know Queen Victoria’s gardener/confidante/perhaps lover. They are made to look like they just grew that way.   And we are told that the gardeners at Petworth are charged with keeping the grounds looking as much like they did in Brown’s time as possible.  The deer apparently are multiplying annually and are not culled. They do a lot of damage to the trees and shrubs around the house. But they add a special dimension to the landscape.

In the program yesterday, the head gardener was interviewed and he spoke of using the paintings as the guide for how the grounds should look. Think of it  – a Turner painting.  He could never have imagined the uses to which his paintings would be put.

We were told that during the winter and spring months when the house is closed to visitors, every room, each piece of artwork, every painting, curtain, hanging and silver ware is cleaned.  They have a veritable army of people employed at this time.

Apparently, all the houses now managed by the National Trust go through this cleaning routine annually.

I have written of Turner and how I love his works.  The largest collection of his paintings anywhere is housed at Petworth House.  I have several large prints purchased from the shop at Petworth that are now framed and hanging in the living room.  If I ever won a huge lottery I would buy a Turner – but where would I put it in my little house?

Of particular interest therefore, when I visited were the Turners.  And last night we were told that in the dining room the Turners were hung low down on the wall so that the 3rd Earl of Egremont could look at the painting of the grounds while sitting at dinner.  He could look at the grounds seen from his dining room window and then turn and see a painting that is a mirror image of those grounds.

During the 3rd Earl’s tenure at Petworth he cultivated and entertained many of the famous artists of the time.  Constable apparently, referred to Petworth House as ‘The House of Art”.

With the BBC we went into the Carved Room.  This is truly magnificent and not to be missed if you ever get to Petworth.

According to Wikipedia “Some of the finest examples of Gibbons work accessible to the general public are those on display at the National Trust’s Petworth House in West Sussex, UK. At Petworth the Carved Room is host to a fine and extensive display of intricate wooden carvings by Gibbons.”

Because of the fragility of the wood after so many years, various ways of dusting are being considered.  We were shown an operation involving an air brush and a special cloth funnel attached to a vacuum cleaner to collect the dust.  Of course, a problem with dusting artifacts is that the dust flies through the air to land on other pieces.  The question of whether the dust could just be left was answered with facts about dust attracting damp and insects and thus damaging the carvings even more.

For me the hour-long program was over too soon.  It left me feeling that I have to go back just as soon as possible.  I just love Petworth House,

And from an email I sent to my family from Sussex:

“Petworth is a charming village – another hub of antique shops.  Little cobbled streets, hardly room for cars, and they are all one way as there is absolutely no room for cars to pass each other.
I wandered along and discovered two very old cottages – one called Christmas Cottage and the other Easter Cottage.  Side by side.  No front gardens.   Front doors opening onto the street.   I do think that there must be a step immediately inside each of the front doors otherwise there is no way anybody over the age of 10 (other than a Hobbit) could get through the front door.”

“The fighting Temeraire” – one of the Turner prints in my living room.

6 responses to “A Major Cleaning Project”