Grocery shopping is not one of my all time favorite sports.  When my husband was alive we used to shop together and as he was the cook, most of the decisions on what to buy were made by him.  Now there’s only me to make these decisions.

But today when I used the last of the tea and the butter was down to a scrape, I just knew that this was going to be one of those days.

So armed with a list (and determined to buy only what was on the list) I sallied forth.   We have a couple of mini marts in our suburb but I had quite a long list and so I took myself of to one of those behemoths called supermarkets.

One supermarket promises “the lowest grocery prices in New Zealand”.  And “everything we do we do to save you money”.

The stores are like big warehouses.  there are no packers – you bring your own bags and pack them yourself.

The second carries all manner of imported things and offers you great service. There is always somebody around to take you to where that item you wanted is located.

They pack your bags for you either in your recyclable bags or their plastic ones.

They also give you Fly Buys a loyalty program whereby you accumulate the points from a variety of sources and choose what you will redeem them for.

Today I opted for the third.  This chain positions itself between the other two.

It has packers and plastic bags if you need/want them but don’t look for any help on the floor.  It is non-existent.  It also has its own loyalty program.  Again you collect the points when shopping and every few months they reward you with a discount voucher for use in their stores.

Well really, none of this makes me jump with joy.  Both New World and Countdown offer the possibility of shopping on-line but I really like to see what I am buying.  Although, my daughter who used this service for some months, assures me it is very good.

So back to my story.  I appeared at my (local) Countdown store to be faced with a car-park absolutely filled to capacity.  As there is no mall in the area, and apart from parking on the street adjacent to the strip shopping, there is only the supermarket car-park to use.   So therefore, on a Saturday morning, parking spaces are at a premium.  I have already asked myself the question – “Why are you shopping on a Saturday when you can do so on any day in the week?”  There is no good answer to that question.

That was not a good start to my shopping expedition.  Remember that it is not one of my favorite occupations anyway.  A man pulled out of his park right in front of me.  Then, coming from behind, and at a great speed, another man slipped right into that space.  Bearing in mind that I am adding ‘gracious’ to my list of values, I smiled sweetly at him.  He got out of the car and apologized leaving me still without a parking place.  He walked off only to come back a few minutes later to say that his wife was holding a park for me.  That restored a lot of my faith in human nature.

To get into the store one had to navigate around various people who had been given the opportunity to sell their wares there by the supermarket owners.

There was a kid raising money for a school trip by selling chocolate bars.  All kids need to raise money so I bought a couple of bars.  Saturday night at home with Lotte and the TV for company.  Don’t I deserve chocolate and didn’t the kids deserve help with their fundraising?

Next there was a couple of women cooking sausages and wrapping them in bread to raise money for a soccer club.  Don’t ever succumb to this – can’t stand the smell of the sausages cooking. And

then there were three of four young, fit guys asking for a signature to support the All Blacks in the upcoming Rugby World Cup.

It was a mission just to get past them all.

My shopping was hassle free I am pleased to say and I only bought a few small items that were not on the list – apart that is from the chocolate.

While wandering around with my list I noticed several harassed mothers with grumpy and/or crying kids and I am glad that I have passed that stage.  I noticed another mother arguing with her teenage boy over which cereal to buy.  I am really glad that I am past that.  And I noticed an elderly couple shopping together.  She held the shopping list and he held the calculator.  Obviously they are on a tight budget.  I am grateful that I haven’t reached that stage yet.

So now the shopping is put away in the larder and refrigerator. 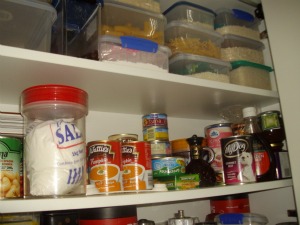 I can complement myself on a job well done and not need to worry for at least another week.

And oh yes, my favorite bread was on special so I have enough in the freezer for several weeks.

Am I the only one who hates grocery shopping?

Now if I had been shoe shopping that would have been quite a different matter. 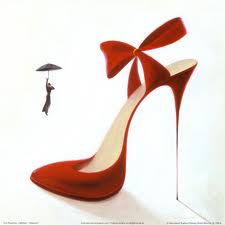