The quote today is from Katherine Mansfield, New Zealand author, 1888-1923

Make it a rule of life never to regret and never to look back.  Regret is an appalling waste of energy; you can’t build on it, it’s only good for wallowing in.

After Robert died and during that time when I didn’t know what I was going to do with the rest of my life, I spent some time in the UK acting as companion to an elderly widow.  During the time I spent with her we became firm friends, even though she was a peremptory, demanding and often overbearing woman. 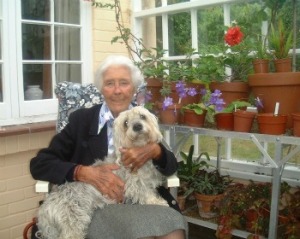 We found that we had a lot in common.  We were both independent women although she was years older than me, and had therefore been born in a different time and was of a different generation.

She was a teenager when World War II was declared.  At the time she had been traveling overland by car to Egypt in the company of two young men; one of whom was much later to become her husband. She had been told by the driver that she could accompany them on this journey but could only bring with her a small bag that she would hold at all times on her lap in the ‘dickie’ seat.  I can’t imagine what her father thought of that.

Although I tried on many occasions she wouldn’t allow me to document or record any of her reminisces about her early life.  I know it would have made fascinating reading.  I told her once that she made the Great Gatsby and his crowd sound dull.

She was quite fearless when I knew her, even though her health was breaking down and her mobility was impaired.  She certainly retained all her mental faculties and was another who completed the Times crossword on a daily basis.

And it is she who I have used as role model as I am aging.  She had many young friends, some as much as 30 years her junior.  She kept as active as she could and each time I was with her for a few months, we went out and about almost every day.  We discovered we had much in common.  A love of French film – she had spent long periods of time in Paris up to and after the war and so was fluent in French.  We discovered that we each had a love of the poems of Rupert Brooke, Longfellow, Percy Byshe Shelley and Tennyson.  I also discovered that she too loved the Turner paintings.  Luckily she lived quite close to Petworth House which houses the biggest collection of Turner paintings in the UK.   And I introduced her to Newbolt’s poem “The Fighting Temeraire’  which has been one of my all time favorites since we had to learn it so many years ago at school.

So we had plenty to talk about during the long winter afternoons and evenings when we were confined to the house because of the English winter.

She taught me never to excuse or regret so I thought that Katherine Mansfield’s quote quite apt when I think about this lady.  And make no mistake, she was a lady.

I think maybe she should also be on my gratitude list, along with my parents for the many things she taught me.  Take a look at my Gratitude List, I have made some additions.